Jaime Wolfe is originally from northwest Ohio, where she earned her Bachelor of Arts degree in English from The College of Wooster. She later obtained a graduate degree in Elementary Education from the University of Pennsylvania, as well as a Master of Arts in English Literature from Middlebury College’s Bread Loaf School of English. Before beginning her teaching career in the District of Columbia public schools, Jaime taught first, second and third grades in Philadelphia Public Schools. After living in Philadelphia for six years, she moved with her husband to Washington, DC, where she taught Kindergarten for five years at the Smithsonian Early Enrichment Center, a museum-based lab school located in the National Museum of Natural History. Jaime uses art, classic literature, Drama, and object collections to make learning come alive for her students! One of her favorite things to introduce to her kiddos is William Shakespeare, among other classic writers, such as Edgar Allan Poe and Sir Arthur Conan Doyle. She does so in a kid-friendly manner that makes such writers accessible to young children. Jaime has been teaching for 12 years. She lives in Washington, DC with her husband, David, young daughter, Amelia and furry feline, Rupert. When she is not teaching, Jaime enjoys writing, reading voraciously, cycling, and training for long-distance races. Contact Information: jaime.wolfe@dc.gov 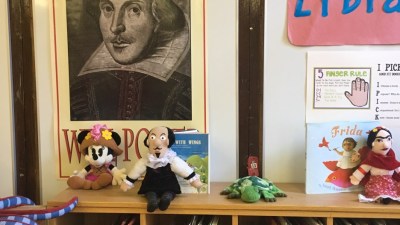 Teaching Between the Cracks

“What do you want to be when you grow up?” This often vexing question has undoubtedly been posed to a person a myriad of times throughout his or her life; from a child as young as a …