In today’s post, guest blogger Pam Campanaro, Education and Public Programs Coordinator at the Samek Art Gallery, Bucknell University, continues the ongoing commentary on the Campus Art Museum report, with an exploration of the on-campus opportunities and constraints on museum creativity.
The Cultural Policy Center at the University of Chicago’s recent report “Campus Art Museums in the 21st Century: a Conversation” suggests that working within a campus museum allows for a kind of freedom unsanctioned at major institutions. Based on my recent experience mounting a cutting edge art event at the Samek Art Gallery of Bucknell University, I would disagree.
Unlike “business model” institutions such as MOMA or the Metropolitan Museum of Art, college museums such as Bucknell’s operate on a much smaller scale, with less pressure to generate revenue from bookstores, facility rentals, or cafés. In theory, this institutional support should give campus museums the freedom to experiment in ways larger institutors cannot; to mount exhibitions that are more democratic, programs that are more cutting-edge. However, not all the forces that work to maintain the status quo are economic.
“Excito! Excito!”: A Veritable Feast” was a social practice installation designed by New York-based artist, Kenneth Tin-Kin Hung, Bucknell’s Graduate Assistant of Printmaking, Jessie Horning, and local photographer Sanh Brian Tran. The concept was to create a two-part program. Part one was an interdisciplinary panel, Food for Thought: How Our Palates Have Become Political, featuring an economist, a chemical engineer, and Hung himself discussing the ways in which food consumption and Americans’ relationship to food has drastically changed course. Part two was a “social practice happening” that invited participants to dine as a collective around a table filled with gelatin apples, artificially flavored turkey, and genetically modified side dishes.
Social practice happenings are based on the concept of Relational Aesthetics, a term coined by Nicolas Bourriaud. In essence, it’s a joined audience envisaged as a community, rather than a relationship based solely on the viewer, the object, and its setting within the “white cube.”  For Bourriaud, “the role of the artwork is no longer to form imaginary and utopian realities, but to actually be ways of living and models of actions within the existing real.” This means the interaction and communal nature of a shared experience and the exchange of language is a catalyst which can generate art as a byproduct.
Try explaining the concepts of Relational Aesthetics or Social Practice Art to campus dining staff or a university head of risk assessment.
The evening prior to our event, artist Jessie Horning came to my office accompanied by the Director of Risk Management from the Office of General Counsel for Bucknell University. I was shown sheets of paper asking for signatures from the individual claiming sole responsibility for this event. In other words: Who would fork over the hundreds of thousands of dollars for medical care and vacation injections if students, faculty, or staff contracted hepatitis from eating “off-site” food? In addition, our artists were asked to present food licenses and show documentation that they were in fact authorized to distribute food in the state of Pennsylvania. For everyone, but particularly for Horning, a twenty-something artist in her second year of graduate study, this was a lesson in negotiating the politics of campus administration. For the museum, “Excito! Excito!” was a cutting-edge program that could hold its own against larger institutions. In the eyes of the university it was a potential liability.
Gallery staff took a huge risk in that evening- after listening to the concerns expressed by the university, we proceeded with our event as planned. We decided that if the premise behind a relational work of art was to allow an audience to become activists in communal experience, then we would let that happen. We would give no direction and allow audience members to dine or not dine based on their own observations. Were we hoping they would take social cues and join us in feasting on gelatin turkey? Yes! Were we holding our breath that administration would not find out? Oh, YES.
After the panel discussion, we invited our audience into the gallery. Gallery staff sat at the food-laden table and we served one another. Initially, the crowds surrounding us were uncertain how to act. Were they invited to participate? Were they to follow our lead and interact with our communal meal? Such questions are the beauty of the social practice movement. Art and life suddenly blurred to the extent that our audience did in fact take the reins and seat themselves. They became contributors, artists even, in the engagement and dialogue around how our food and eating practices have the potential to be, well… art. 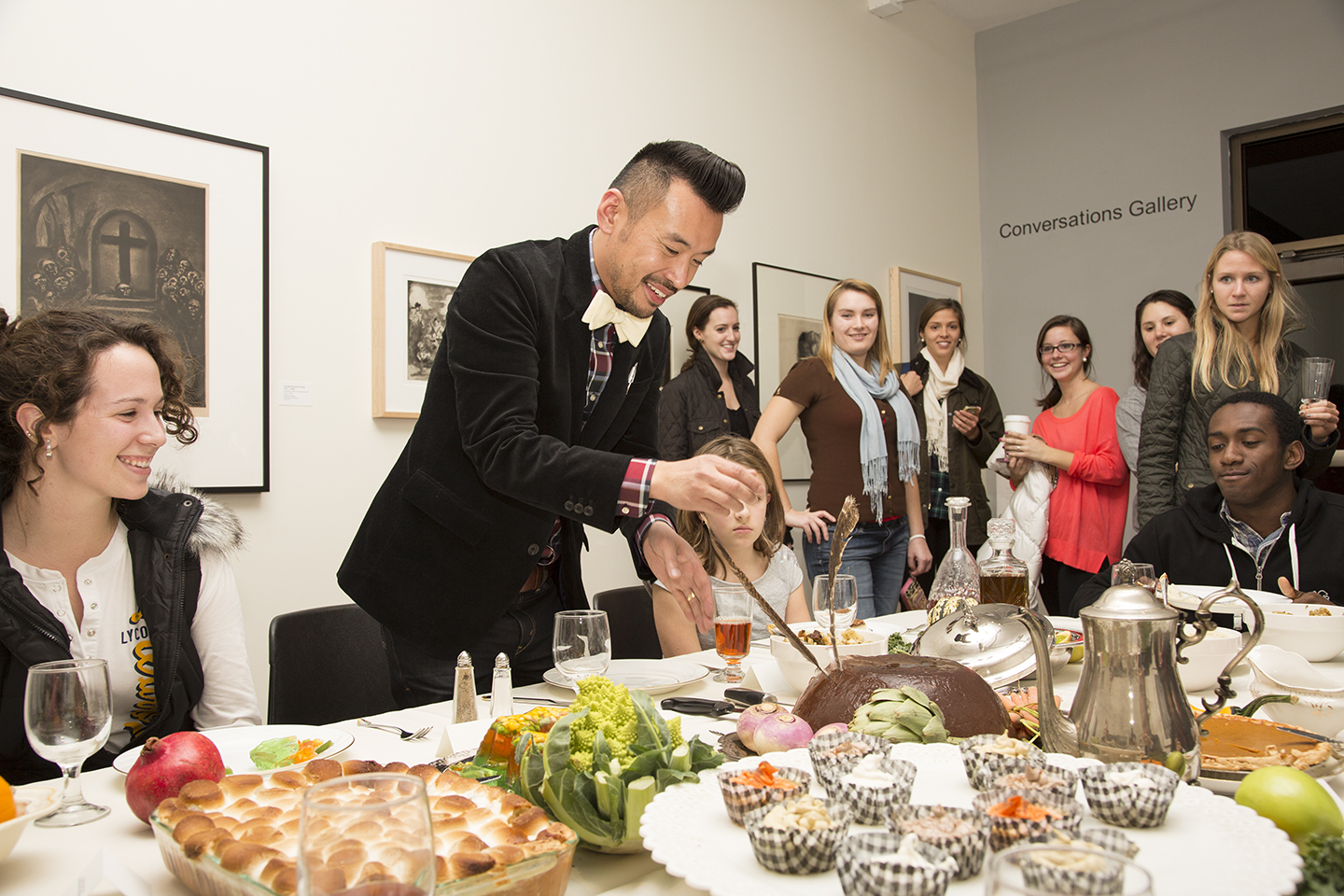 In the end, “Excito! Excito!” attracted more people than did any of our other programs this semester. I’ve deemed it our most successful program to date, not because of the number of visitors, but because our visitors became participants. For that evening, we as a campus museum mirrored the controversial, push-the-envelope kind of programming present in larger institutions. We handed our audience the keys to the museum, and invited them to be the curators of their own experience. And, while the risk we took in ignoring the authoritative voice of campus administration was a great one with potentially serious consequences, we elected to stand behind our mission to be a learning lab of opportunity for our campus—which is the real reason campus museums have a place in our futures.
What do you think? Would it be more difficult, or less, to mount a “social practice happening” such as Excito! Excito! at a non-campus museum? Who, at your museum, oversees risk management and legal compliance, and how are they involved in planning for exhibits and events? Would they have put the kibosh on this happening? Please weigh in using the comments section, below.
Elizabeth Merritt, Founding director of the Center for the Future of Museums, American Alliance of Museums

3 thoughts on “Do Campus Museums Enjoy Greater Freedom to Innovate?”