One frustrating limitation of CFM’s work is that usually I have to cover the great things going on in museums based on second hand accounts—articles I’ve read in the press, Skype or email interviews with museum staff.  So I was delighted when CFM staff Nicole Ivy (Museum Futurist & ACLS Public Fellow) and Sylvea Hollis (Project Manager) volunteered to take a road trip to Monticello and try out their interpretive app. The app, layering an exploration of slavery onto the site’s interpretation, speaks to many of the issues facing historic sites today: how to revise and expand interpretive materials to be more inclusive and well-rounded, how to serve the interests of diverse audiences and (not the least) to the extent these new materials are digital, how to make sure they are noticed, and used, by visitors as a whole, not just those already inclined to seek them out.
Just before the start of this fall season, we visited Monticello—Thomas Jefferson’s plantation estate near Charlottesville, VA–to try the museum’s “Slavery at Monticello” app. It introduces visitors to life at Mulberry Row, the 1,000-foot path south of Thomas Jefferson’s home. Visitors can use the app to access more than 100 types of content based on twelve biographies of people who were either enslaved, employed, or residents at Monticello. A $10 million grant from philanthropist David M. Rubenstein made it possible for the Thomas Jefferson Foundation to give greater attention to building up Mulberry Row while also restoring Monticello. 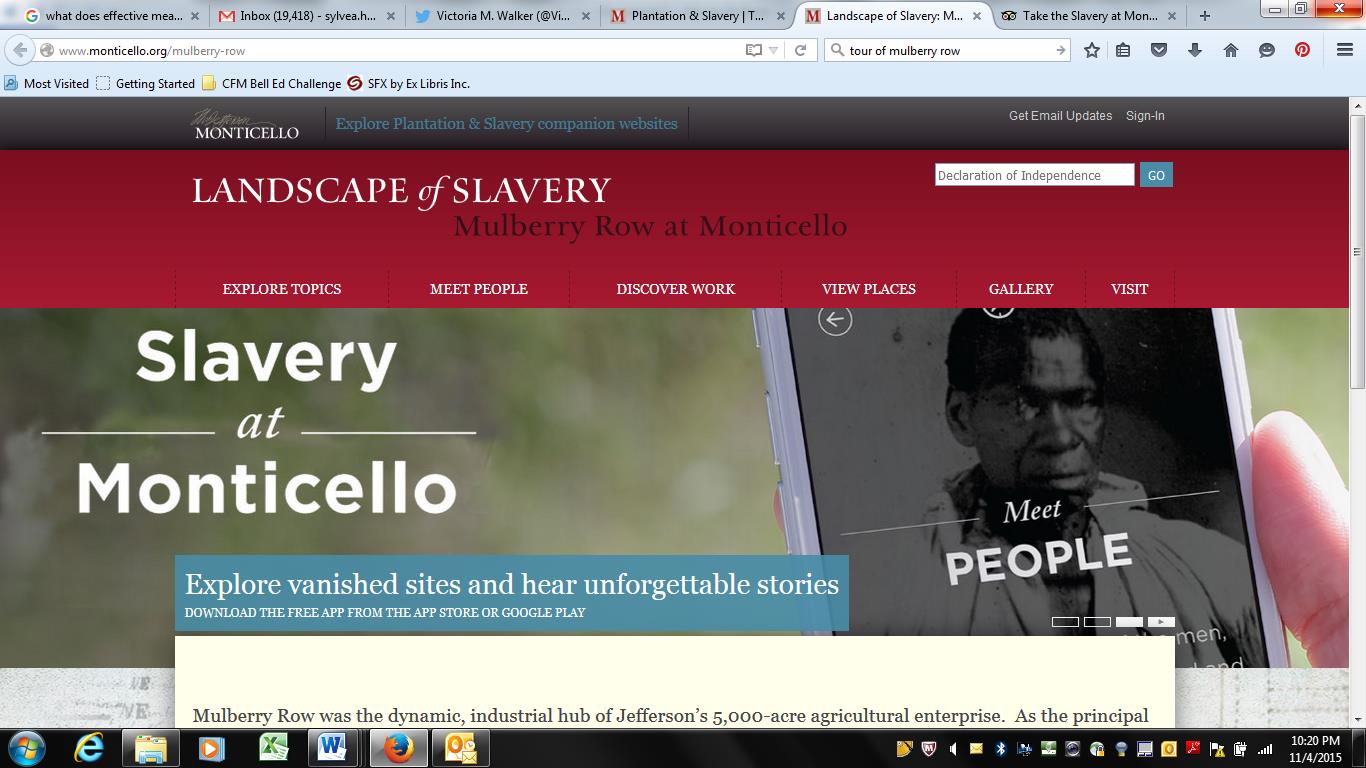 We arrived already impressed by the app’s user-friendliness and were excited to see how it would enhance our experience of the space. We were also interested in finding out what (and or how) visitors learned about the enslaved people who once lived there. Both of us have memories of visiting Monticello within the past ten years, so this most recent visit marked a chance to notice the significant changes recently made to the site.
“Slavery at Monticello” provides visitors with enhanced opportunities to learn about the everyday world of the enslaved people who lived and worked Thomas Jefferson’s plantation home. Thanks to this new technology and a recently added 45-minute group tour, visitors can now engage more deeply with the histories of enslaved people. The application’s focus on their lives, work, and stories shifts previous interpretations of slavery on the grounds from relative opaqueness to high relief.
News about “Slavery at Monticello” is visible in a variety of settings and media forms. The Thomas Jefferson Foundation featured the app on Monticello’s homepage and ran several press releases about its debut. In addition, multiple NPR stories about the app helped generate buzz.  Social media and target marketing is in the Foundation’s toolkit as well. We have seen lively Twitter conversations and blog posts. Interestingly, Monticello also runs banner advertisements about their institution on some websites that cater to readers interested in contemporary black popular culture. Visitors may arrive to the grounds without knowledge of this new option, but they certainly will not miss the tent-shaped signage in the plaza or the HD television ad in the ticket center. 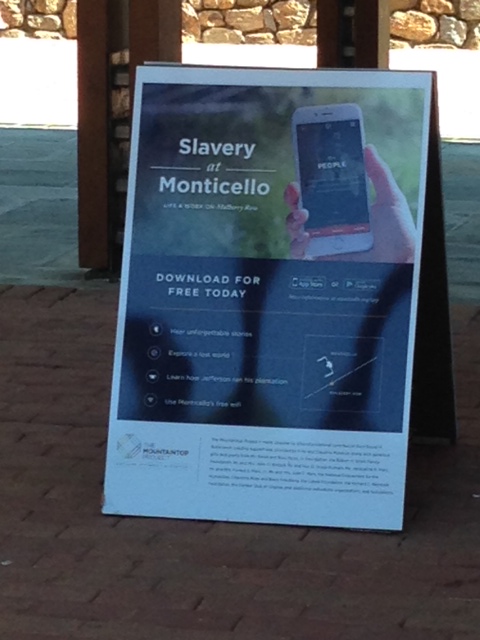 One of the app’s most striking features is its geolocated tags that help visitors imagine structures no  longer physically present on Mulberry row, For instance, piles of bricks are all that remain of Mulberry row’s nailery and blacksmith’s shop, but app users can see video showing 3-D representations of the buildings once they arrive. The app continues to vibrate with more information as you travel along the path.
”Slavery at Monticello” does important work—but only if people use it. There were scores of visitors that day. We informally polled tour groups, and found only two people actually using the app. Moreover, the app’s reach hardly compares to the site’s master narrative that frames Jefferson as the great architect of Monticello and U.S. democracy. The vast scale of his greatness on the grounds is made palpable through overall layout of campus and tour experience.
A sign reading, “Monticello as Experiment,” flew in the visitor center’s main square. The words immediately invoked thoughts of W.E.B. du Bois, who called the Reconstruction (in Black Reconstruction) an experiment in democracy. In his textbook, Give Me Liberty!, historian Eric Foner also expands on the experiment metaphor as a strategy for understanding how democracy in the US has changed over time.  Through this method, readers learn how people have struggled to transform government.
What if the local story of slavery at Monticello were also interpreted through a framework of a great experiment? This would create space for conversations with and between visitors about complicated tensions that exist throughout the long arc of this nation’s democratization, and remind visitors that:
CFM’s work on demography and trends reminds museums that in their future audiences will (and should) include a growing percentage of people of color. These new audiences want to see more inclusive content and deconstruct master narratives. What will be the future of plantation tours, large and small? And, how can we continue to foster meaningful conversations between visitors in these spaces (with technology and without)?  Please weigh in with your thoughts—here on the Blog, or on Twitter, where we are @nicotron3000 and @Sil_ve_uh.
Additional Resources:
Ask a Slave: The Web Series. This satirical web series is based on the actress’ time working as a living history character at George Washington’s Mount Vernon. Starring Azie Dungey as Lizzie Mae and directed by Jordan Black.
In the same spirit, African American History Fail @afamhistfail tweets about the real (unfortunate) things tourists say.
Joseph McGill’s  Slave Dwelling Project identifies and assists property owners, government agencies and organizations to preserve surviving slave dwellings.
Traces of the Trade: A Story from the Deep North (2008). In this feature documentary filmmaker Katrina Browne tells the story of her New England ancestors, the largest slave-trading family in U.S. history. She and nine of her cousins retrace the slave trade triangle and share the perspective they gain on the black/white divide.
And some recommended reading:
Jennifer L. Eichstedt and Stephen Small, Representations of Slavery: Race and Ideology in Southern Plantation Museums (Washington, DC: Smithsonian Press, 2008)
Rex Ellis, “Re: Living History: Bringing History Into Play.” American Visions 7:6 (December-January 1992), 22-25
Fath Davis Ruffins “Revisiting the Old Plantation: Reparations, Reconciliation, and Museumizing American Slavery.” Museums Frictions ed. by Ivan Karp and Corrine Kratz. In press.
“A Faithful Witness’: Afro-American Public History in Historical Perspective,” with Jeffrey Stewart. Presenting the Past: Critical Perspectives on History and the Public. Susan Porter Benson, Stephen Brier, and Roy Rosenzweig, eds. Temple University Press, 1986.
Michael W. Twitty, The Cooking Gene, forthcoming in 2016 from HarperCollinss
Skip over related stories to continue reading article