The Museum of Vancouver’s “lab of happiness,” demonstrates the museum’s commitment to strategic partnerships based in community need and well-being. You may recall last week we examined the Happy Museum Project, a group in the UK dedicated to promoting sustainability. Today, Gregory Dreicer, Director of Curatorial and Engagement at the Museum of Vancouver, introduces us to their happiness initiatives. Follow the Museum of Vancouver’s ongoing work on Twitter: @Museumofvan
The future has taken Vancouver hostage. An endless series of house demolitions and a boom in high-rise construction are transforming the landscape. High living costs, low salaries, a housing shortage, and gentrification have heightened anxieties in a city deemed most livable and most unaffordable. An epidemic of disconnection is said to be affecting Vancouverites. Urban researcher Andy Yan reports that no other North American city has a lower percentage of people locally born. Like New York and a few other cities around the world, global capital in search of a home is transforming the Vancouver region, making developers the happiest people on earth . . . if you believe that money makes you happy, which local experts such as Prof. Elizabeth Dunn at the University of British Columbia tells us, is not how money works. In the midst of the wealth and the want in this ethnically diverse, former hippie haven on Canada’s west coast, a laboratory of future happiness may emerge—with the Museum of Vancouver at its center. Here’s a brief story about how the museum arrived at this threshold.
Over the past ten years, CEO Nancy Noble transformed the Museum of Vancouver from a Smithsonian-style showcase of civilization to an innovative institution focused on the city. But, despite a series of pathbreaking exhibitions, the museum was still not connecting with a broad audience (for reasons including structural conditions that go far beyond the usual institutional challenges). When I moved to Vancouver in 2014 to become Director of Curatorial and Engagement, I read the Vancouver Foundation’s Connection & Engagement report, which deemed Vancouverites isolated and lonely. It sparked the city government to develop the Mayor’s Engaged City Task Force, which issued a host of recommendations. And recently, the Healthy City Strategy was approved by the city council, with ‘cultivating connections’ as one of its goals.
It turns out that Vancouver has a happiness brain trust that includes Prof. John Helliwell, co-editor of the United Nations World Happiness Report and whose work shows that happiness is a critical measure of quality of life; and Happy City author Charles Montgomery, whose consultancy on urban design works with cities around the world. A passionate group of entrepreneurs, designers, and artists are taking on social disconnection, from individuals such as Jorge Amigo to inclusion experts such as Gord Tulloch and renowned social innovators Al Etmanski and Vickie Cammack. 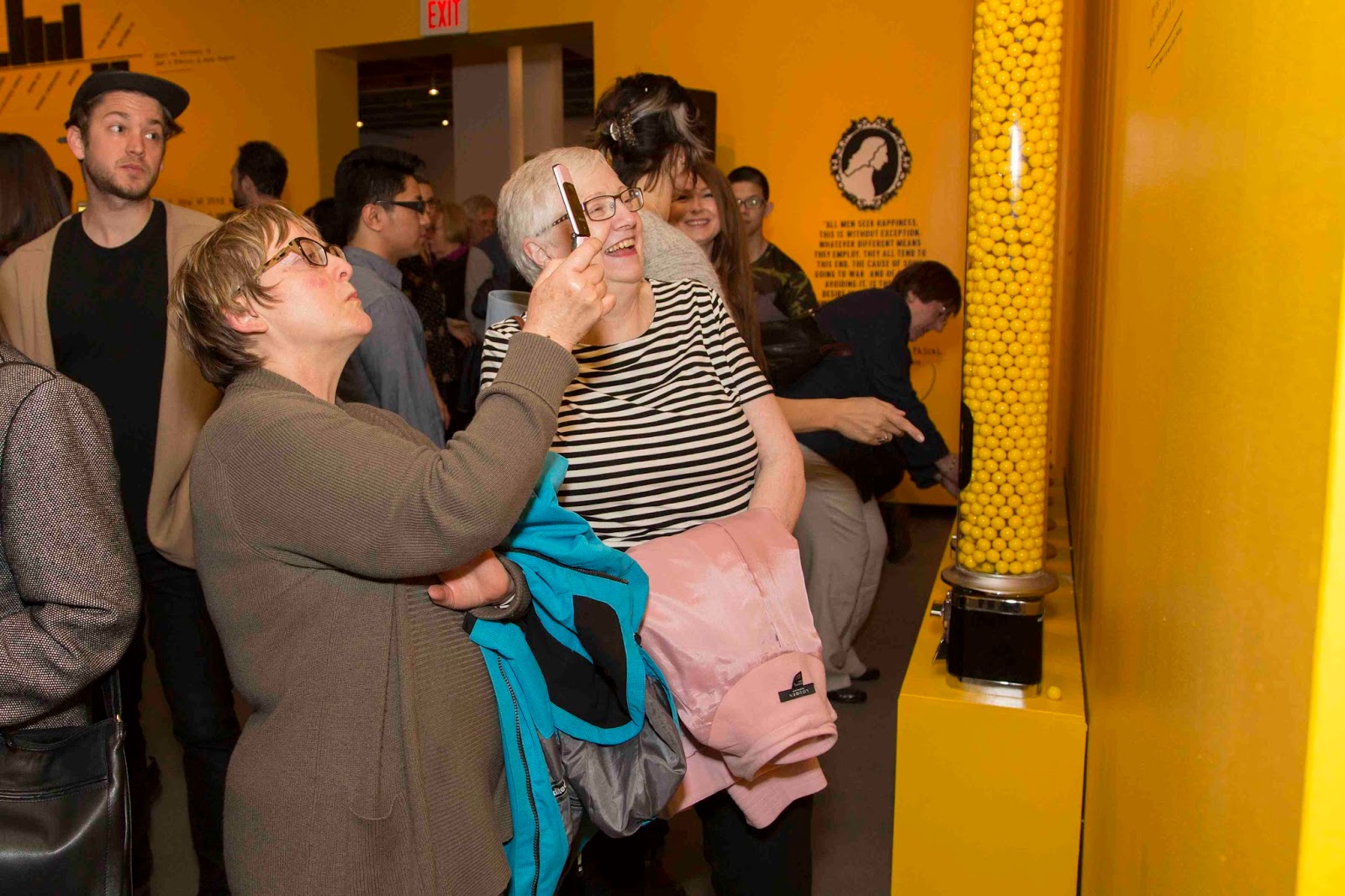 A visitor in foreground photographs one of many gumball machines, while one in background samples the candy at Stefan Sagmeister: The Happy Show
I had experienced Stefan Sagmeister: The Happy Show at the Chicago Cultural Center, where it was enormously popular. It was developed by the ICA, which was kind enough to let us take it on. I wanted to bring it to Vancouver because I realized that social connection—that is, individual relationships—is more than the key to personal happiness. It is the key to urban wellbeing. A socially connected city is healthier, is ready for disasters such as earthquakes, and is more sustainable; being safe, green, and strong is a community effort. In other words, your level of happiness says a lot about your future and the future of your community.
In The Happy Show, graphic designer and visual artist Stefan Sagmeister does everything right. Data visualizations, videos and interactive pieces that focus on Sagmeister’s insights about happiness, along with the artist’s handwritten commentaries on the walls— a mere description of the exhibition does not do it justice. He developed the project outside the museum-industrial complex. It also stands outside the standard way that museums treat design—by reducing it to ‘art.’ Museum anthropologist Rachel Roy, in consultation with Museum of Vancouver Curator of Contemporary Culture Viviane Gosselin, conducted a Happy Show visitor study. We are still analyzing the data, but the clear message is that it inspired people to think about their own lives. The Happy Show broke attendance and revenue records at the museum—and helped push it in a new direction.
During the run of The Happy Show, we developed programs and partnerships. A symposium co-presented with CIFAR brought to the museum urban wellbeing experts such as Meik Wiking, whose Happiness Research Institute, based in Copenhagen, puts out a trends report that claims that Denmark’s happy reputation increases tourism. At the museum, we created programs including a series of Happy Hours that brought people together for informal presentations and to hang out and have a few drinks. We created a companion exhibition, #makesmehappy, which featured an artifact selected by a local personality, their story, and a call to action. Vancouverites posted thousands of notes about what makes them happy on a large window—a sight as inspiring as the mountains no longer visible through the window. We included an opportunity in this exhibition for people to test their philanthropic muscles, thanks to Chimp, a Vancouver-based organization that is changing how people give—and increase the chances of most museums, that is, the small ones that go begging, while the 1% gets almost all.
The Happy Show marks the beginning of a realignment in the Museum of Vancouver’s approach to Vancouverites. Many museums, when they speak of community engagement, refer to connecting communities to the museum. Instead, we are beginning to concentrate on what is referred to as bridging—creating connections among groups. I understand now that some of my most successful projects explored bonding and bridging, including conflict. Between Fences, for example, originally at the National Building Museum and later in a Smithsonian Museum on Main Street version, explored fences as a symbol of relationships between individuals and groups. It touched people deeply. The Museum of Vancouver’s focus on design has enormous potential not because it’s an art or because ‘design thinking’ is a trend or because it will encourage us to spend large sums on digital experiences—however nice these things are. The potential lies in the fact that design (aka creativity or innovation) is a networked activity. It’s about people working together. Which is an activity that makes them happy. So instead of reproducing the art-museum focus, we created Why I Design—an evening event consisting of 30 designers standing around waiting to talk with the public about what they do. In 2014, 300 people came; in 2015, over 400. People were excited to connect with designers (and vice-versa!); and designers like the opportunity to connect with each other. 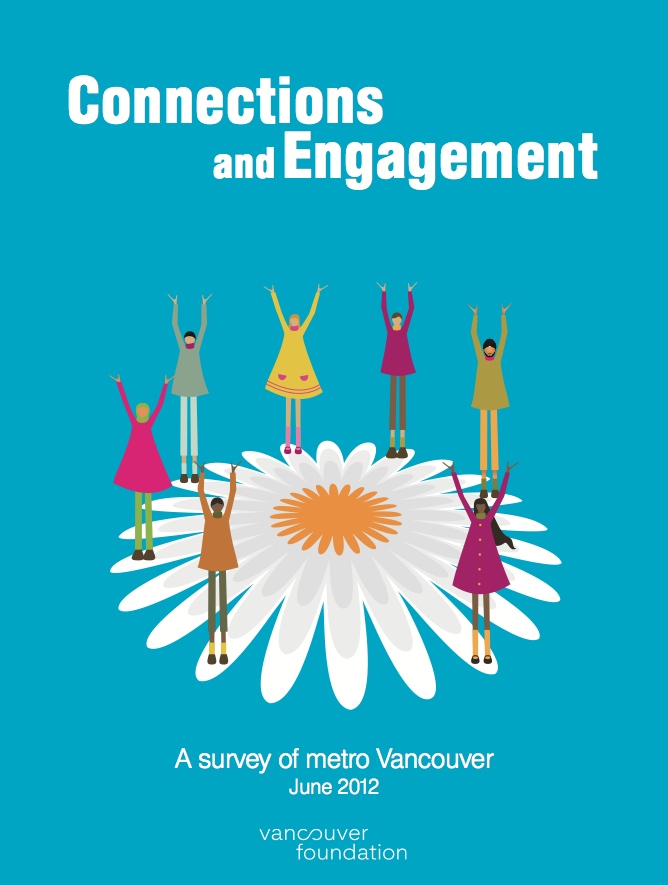 The Museum of Vancouver recently developed a new vision: To inspire a socially connected, civically engaged city. We hope to orient staff and build a new board around it; and we are looking to work with and learn from others. The Bay Area seems to be a hotbed of bonding and bridging, including Hugh McDonald, who developed the Exploratorium’s Science of Sharing, and with whom we hope to collaborate. I’ve been knocking on the door of the Oakland Museum, fortunate to have the Irvine Foundation behind their efforts at bridging. And of course, there’s Nina Simon. I’ve been asked to work with Vancouver’s city government in figuring out how to implement the social connection component of the Healthy City Strategy. Thanks to support from the Koerner Foundationand a planning grant from the Vancouver Foundation, we are developing with social practice artist Justin Langlois a project called Trust, in collaboration with artists, designers, and social science and innovation experts.  More about that in the future.

Deeper understanding of how we live together and apart must be the foundation of the Museum of Vancouver’s work, if it is to succeed. With the humanities devalued and life-long learning a chimera (in terms of demonstrated ‘impact’), it’s important to observe that social connection and collaboration are behind happiness—and learning. And connection can be measured.
Skip over related stories to continue reading article

One thought on “Happiness, Design, and the Urban Future”