Today’s guest post is by the Alliance’s president & CEO, Laura Lott.She’s been on the hunt for resources to help AAM become a more inclusive workplace, and that search took her to Minneapolis for what turned out to be a primo conference on the topic. I encouraged her to share that experience with you here on the Blog. Perhaps next year we will have a whole museum contingent at the Workplace Inclusion Forum… 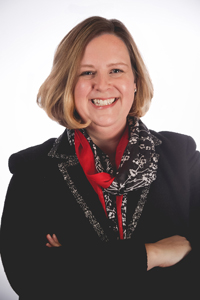 Last month, at the advice of Chris Taylor – the diversity officer at Minnesota Historical Society, I attended the 2016 Workplace Inclusion Forum in Minneapolis. It was a really incredible, stretching experience – mental gymnastics, as one presenter described it. After hearing some of my immediate observations, Chris recommended I talk about my experience publicly – to encourage more CEOs and directors in the museum field to take steps to learn about diversity and inclusion. Chris has been a mentor to me in this area since we were introduced late last year. And I know he is working so hard to bring true inclusion practices to MNHS and to the museum field. I owe it to Chris to do as he advises. So, here goes…

I consider myself pretty worldly and, having grown up in a middle class family outside of New York City in the 1980s, totally accepting of diverse people and cultures. I was an exchange student in Tokyo for a year in high school, living with a Japanese family and attending a Japanese school. I chose American University, in part, because of its tremendous School of International Service, diverse student body and the global focus of its academic programs as well as its location in the global city of Washington DC. My family is a wonderfully messy mix of religious traditions, and we love to travel around the world.
Early in my career, I helped oversee and report on a Fortune 500 company’s first diversity initiative as part of the corporate social responsibility department, learning about EEOC and supplier diversity best practices. I entered the male-dominated financial services industry as a young woman and, last year, was the first woman (and I think probably the first person under 40) to be named president and CEO of AAM.
Point being, I felt pretty confident that I had some relevant experience in different aspects of diversity. Though, I’m always curious – and I hunger to learn more. With diversity, equity, access and inclusion a priority in AAM’s next strategic plan, I specifically wanted to learn more about the D&I field. And AAM itself has a lot of work to do – to be a more diverse and inclusive workplace, and to some extent, I feel like I have to start this work “at home.” A workplace inclusion conference seemed right.
I was a little nervous walking into an unfamiliar conference dominated by people who have made their careers as chief diversity officers…many in very big companies with lots of resources. I assumed, as a white person, I would be in the minority – something I don’t experience frequently and which I don’t have particularly fond memories of from my time in Japan. I was a little afraid of conversations about “white privilege” and #blacklivesmatter, especially as the Hennepin County attorney was announcing officers would not be prosecuted in yet another case of a young black man being shot by the police.
The conference’s opening session was an enlightening speech by Anand Giridharadas, a New York Times columnist and author.  Anand talked about the decentralization of the world – where the US is not at the center and white Christian is no longer the “default setting.” It was important – and lofty enough to feel more inspiring than threatening.
Then, I went to the #RaceMatters session. It was uncomfortable at times. I thought, optimistically, “I must be doing something right!” Everyone – and leaders especially – have to make themselves vulnerable to make real progress.
It got tougher.
Throughout the next two days I learned about the “Intercultural Development Continuum” (Shoot, I thought my “color-blindness” was a good thing.); talked about “coded language” (and realized I have said some of those things…recently.); and faced conversations about whether all women (white and black) are in this effort for equality together. I felt, at various times, guilty, embarrassed, disappointed with myself, and even ashamed.
Some conversations were downright exhausting and overwhelming…is there really any way to succeed in this work?
I took solace when even experienced diversity officers admitted they often feel overwhelmed and unequipped to deal with the emotions and challenges this work entails. We spoke about it as a journey, about having to meet people where they are and the importance of perseverance. I realized inclusion, like anything else, is a skill. I have to study, practice and apply it over and over again, continuing to perfect my practice – just like yoga, public speaking or any other skill.
The truth is I’m terrified…of making a mistake, of inadvertently saying something insensitive – looking naive or stupid (perhaps in this very post!) or, worst of all, compounding the hurt many feel from years of insensitivity, discrimination and racism with my well-intentioned words and actions. I’m afraid of critical and angry voices who think I should do more or different things. And I’m afraid of pouring myself into this – and still not having a big enough, tangible impact.
The fear can be – and too often is – paralyzing.
I won’t be paralyzed. There’s no time to wait. There are tools to help. And I believe people will help…if I’m sincere.
There was a conversation at the end of the conference about boldness. And on the prestigious panel of diversity officers from Starbucks and Major League Baseball and others, some said it’s not bold to simply do the right thing. Maybe it’s not bold. But it does take courage to willingly step into discomfort.
It reminds me of learning to fly an airplane. Actually, the flying part was fine. But I had such a hard time landing! Practice flight after practice flight, I’d bounce that poor little single-engine Cessna down the runway. I was so embarrassed I nearly quit. I had never before failed quite so awesomely – and publicly. Thankfully, due to a supportive flight instructor (with a strong stomach), I kept with it – and enjoyed the thrill of flying – and landing – solo, ultimately earning my pilot license and a lifelong hobby that brings me remarkable joy.
In this much more important and complex area of diversity and inclusion, I still have a lot of work to do. But I’m not staying paralyzed, and I’m certainly not quitting. I’m taking steps – educating myself, investing time and money in training myself and practicing my new knowledge. I’m putting this naked admission out there, in hopes that museum directors/CEOs will join me at next year’s forum.
Diversity & inclusion isn’t about “fixing” or “solving” or “being done.” Instead it’s about “transforming” and “improving” and “developing.” It’s a journey of discovery. Isn’t that what museums are all about?
Skip over related stories to continue reading article

Core Concept Primer: DEAI work must be measured and assessed

Core Concept Primer: DEAI is an ongoing journey without a fixed endpoint

Core Concept Primer: DEAI is the responsibility of the entire organization