How can teens play a role in solving some of the most urgent environmental issues of our time? That is one of the questions 42 girls from Minneapolis, Minnesota and Nairobi, Kenya considered through Girls Design the World, an international museum and community project launched last fall between teen girls at the Minneapolis Institute of Art (Mia) and National Museums of Kenya (NMK).

Girls Design the World Collaborative Journey, Of Us and Art: The 100 Videos Project, Episode 59 from Minneapolis Institute of Art on Vimeo.

Over the past eight months, girls in each country worked to design prototypes that address environmental issues in their local communities, connecting virtually over the course of the project to discuss their work and share advice. In the spring, some of the girls had the opportunity to travel internationally to meet in person to see the results of the designs which were exhibited at Mia and NMK.

In getting involved in the project, 16-year-old Anya knew that she was going to learn about the design thinking process as a tool for developing solutions to environmental challenges in the greater Minneapolis area. What she didn’t anticipate was that she would meet a new friend from the other side of the world who would fundamentally change her, shifting her perspective about equity, education, and opportunity for girls around the globe.

Girls Design the World – Design Thinking from Minneapolis Institute of Art on Vimeo.

Anya was one of the lucky students chosen to travel to Nairobi, in part because of her unwavering commitment to the project, which required weekly meetings at the museum.

We met almost every single week of the whole school year. I don’t think I missed any meetings and it definitely was a priority for me and the other girls. No one dropped out of the program over the course of the year, not from Kenya or the US. We all loved it.”

The seven American girls who visited Kenya last March enjoyed a packed itinerary that included everything from behind-the-scenes tours at Nairobi’s National Museum and the Nairobi Gallery, to school visits, to excursions to national parks where wild animals roam freely in their natural environment. But the most exciting aspect of travel was that the American and Kenyan girls finally were given the chance to meet in person, building the foundation for lifelong friendships.

And it was in Nairobi that Anya met Senaji.

When we first met the Kenyan girls, we were all jumbled in this huge group, exchanging phone numbers and Snapchat. There was this one girl sitting by the window by herself, and I decided that I was going to go up to her.

Senaji and Anya soon became inseparable over the course of the visit to Kenya as well as Senaji’s later visit to the United States with the Kenyan group, sharing about their own lives, hopes, and frustrations. Anya was particularly struck by Senaji’s resilience and determination in the face of the challenging circumstances of her life. Most of the girls from the Kenyan group were from the city of Nairobi and attended private boarding schools. Senaji was different: she was from Mukuru Kwa Reuben, an informal settlement in an industrial area on the outskirts of the city, and home to more than half a million people. She had been chosen for a coveted spot on the GDW team after a particularly competitive process. High rates of crippling poverty in the settlement often limit local kids’ access to many educational experiences outside of Mukuru. In fact, Senaji had only been to Nairobi a handful of times, mostly through visits to NMK associated with the project.

“Senaji’s goal is to get her education, to make something of herself. She was actually born in Uganda, and when she was little, she, her mom, and little brother left to start a new and better life in Kenya. In childhood, she wasn’t able to go to school; she sold potatoes and watched her brother… she had to make money for her family to survive. It wasn’t until she was older that she got to go to school and now, her education is her entire life. She’s an inspiration to her schoolmates, and she dreams of leaving the community so she can go to college.” Senaji explained to Anya how focusing exclusively on her academics has been critical to her success, and that she hadn’t spent a lot of time socializing or hanging out with friends. Says Anya, “I couldn’t fathom that. But she told me some really sad stories about how some girls her age are involved in prostitution to make money; young people have died of AIDS. And others are in gangs. The things she experiences every day are things we can’t even imagine. She said if you let your social life take over, you won’t be able to leave.”

The American girls had the opportunity to visit Mukuru while in Kenya, as it is the site of many of the environmental challenges that the Kenyan girls sought to address through their prototypes.

The visit left an indelible impression on Anya, all the more significant because she knew it to be the home of her new friend. “I have never been anywhere like Mukuru before. It was so humid, and there was garbage everywhere, and dogs, and the houses were made of blocks of wood… it was mind-blowing. We crossed a bridge over this small pond, and there were mounds of trash everywhere and there was a cow just standing in the middle of this dirty water. And it was then that we realized that this is the place where they get their water: to cook with, to drink, for showers.” But it was also a heart-warming and inspiring place. “Your immediate reaction to a place like that would be pity- they don’t have a lot of exposure to the world there, and they don’t have a lot of things. But for that exact reason, there’s a different atmosphere where you see people living with a lot less, but they are just as happy. Those people told us about their lives and what they do for fun. They play soccer, they dance, they listen to music.”

Anya’s experiences in Kenya precipitated a broader reflection on some of the differences between her experience as a teen in Minneapolis, and the lives of the Nairobi girls. She noted that with her new Kenyan friends, there was a natural, more instant, “human” connection.

When I met Senaji, it was just with open arms. She grabbed my hand and held it, taking me around the museum and telling me stories. Why can’t things be like that here? Why can’t our relationships be so raw, so pure? The girls in Kenya are just so accepting.

She also articulated her frustration with some teens in her home community who take the relative bounty of opportunity they’re given in the United States for granted. “Meeting Senaji makes me wonder… I mean, she’s grown up in a hard situation. And she’s still making the best of it, and nothing is being handed to her. If you put a girl like her here, and gave her the opportunities that we in Minneapolis have, she would truly change the world. The little things we think we need here are actually luxuries. And we don’t actually ‘need’ those things. Going there and seeing how happy they are with so little, seeing how driven they are and how they need to work harder than I would probably ever be able to bring myself to work makes me sad. They should have the opportunities we have.”

But whether it be through talent, courage, or just sheer force of will, through this project, new opportunities have emerged for Senaji and all the GDW girls. Before parting ways, Senaji shared a final story that had a particularly profound impact on Anya. When Senaji was little, a man from outside of the settlement came to visit Mukuru with a helicopter and was charging a small fee to take the local kids up for short flights. Senaji had never been in an airplane or a helicopter and sprinted home to ask her mother if they had the equivalent of a few dollars to spare so she could go. Her mother’s reply set her on a path that would give unwavering purpose and direction to the rest of her life. Her mother said, “I’m so sorry, but we don’t have the money for you to do this right now. But keep working hard in school. Keep doing your best. And one day, I promise, you will fly.”

And fly, she did– for the very first time in her life, on an airplane to Minneapolis for the Girls Design the World project.

“Girls Design the World: Supporting Green Communities with STEAM” is a Museums Connect project. Museums Connect is an initiative of the US Department of State’s Bureau of Educational and Cultural Affairs that is administered by the American Alliance of Museums. 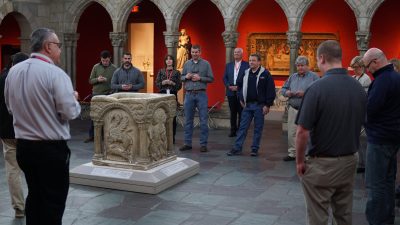 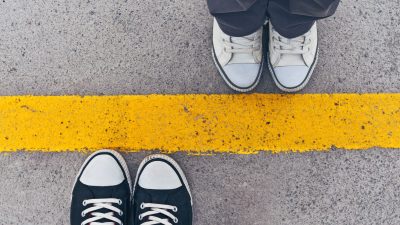 How Can Education Programs Help Bridge the Digital Divide? 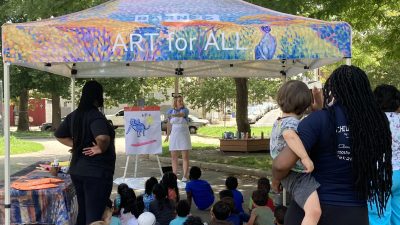