Today Gail Ravnitzky Silberglied, Vice President for Government Relations & Communications here at the Alliance, can help rebuild an appreciation for facts in a year awash in fake news.

There are dozens of reasons to be part of Museums Advocacy Day in February, but this year, there’s a critical new message to carry to lawmakers: the role of museums as truthtellers in a “post-truth” world.A decade after comedian Stephen Colbert introduced ‘truthiness’ into the American lexicon, Oxford dictionaries selected “post-truth”—defined as objective facts being less influential in shaping public opinion than appeals to emotion and personal belief—as its 2016 word of the year.

The word of the year is meant to be one that captures the “ethos, mood or preoccupations of that particular year and to have lasting potential as a word of cultural significance.” Post-truth was selected because of its increased usage related to the Brexit vote in the UK and, of course, the 2016 presidential election, during which the Washington Post blog Fact Checker (which rates political claims on a scale of 0-4 Pinocchios) reported on 314 mostly false claims by presidential candidates. An ally of one presidential campaign was even quoted as saying, “There’s no such thing, unfortunately, anymore, as facts.”

Over time, surveys have tracked the public’s loss of confidence in government, the criminal justice system, banks, corporations, organized religion, public schools, and the traditional media. And 2016 made things a whole lot worse for those in the media: more than 200 websites routinely shared fake news that was viewed 213 million times during the 2016 campaign.

So what can be done to disrupt the pattern of fake news, restore trust in public entities, and bring about more civil discourse?

Americans view museums as one of the most important resources for educating our children and as one of the most trustworthy sources of objective information, according to AAM’s public opinion polling. Reach Advisors found that museums rated higher in trustworthiness than any other set of institutions measured, including Wikipedia, local newspapers, and even academic researchers.

The Organization of American Historians study found that museums are considered a more reliable source of historical information than books, teachers, or even personal accounts by relatives. (Sorry, grandpa!)
So museums not only have amazing stories to tell—about their work with schools, teachers, veterans, seniors, persons with disabilities, and underserved communities—and important collections to protect, they can also boast about public trust. Museums are credible, respected, and beloved; what lawmaker wouldn’t want to be associated with those qualities? But if we are not at the table, no doubt museums will be on the table when Congress makes critical budget decisions.

Make the case that federal support is a worthwhile investment—and that the charitable deduction is a financial lifeline for museums—by participating in Museums Advocacy Day, February 27-28 in Washington, DC.
What else can museums do?

Jeffrey Herbst, president and CEO of the Newseum, argues that the way to address fake news is not by addressing the supply of it, but the demand for it. He notes that to lessen the demand for fake news requires real news and information becoming available to more people in a more engaging format. And museums do this beautifully, spending $2 billion each year on education, three-quarters of which is spent on K-12 students, often tailored to the state, local, or core curriculum. One example is the Newseum teaching media literacy—discerning what is true and what is not by analyzing sources and evidence—to millions of students through the free online NewseumED program.

Museums can also follow the model of the philanthropic sector.

Writing about “the pervasive loss of trust in major institutions of government and society,” MacArthur Foundation President Julia Stasch recently said, “To be effective, philanthropy as a sector must facilitate, and operate in, an environment of trust and goodwill…We must listen more, be more flexible and inclusive, and allow those who experience directly the problems we seek to address even more room to participate fully and lead. We cannot take trust for granted; it must be earned in all we do, every day.”

In this “post-truth” world, museums have an opportunity to demonstrate their immense value by continuing to open their doors, share knowledge, engage new and diverse audiences, foster innovation, and retell the stories from our history. 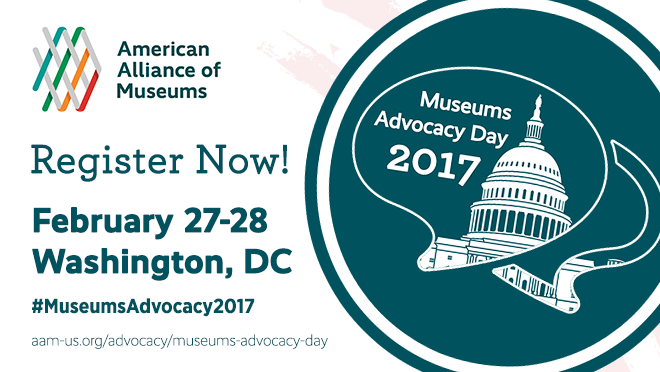 Join us in staking out museums’ rightful place as truthtellers. We invite you to share your story at Museums Advocacy Day. AAM members—and members of our key partnering organizations—register for free. See you in Washington, DC!