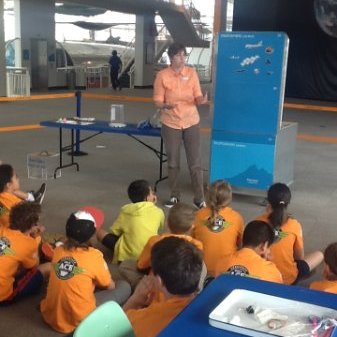 I agreed to write a blog post about cultural responsiveness in education before November 8. To be honest, I didn’t have much of an idea of what I would write then, but I woke up November 9th with even less direction. And then I listened to the voices of my friends — queer folks, people of color, women, Muslims, immigrants, and our allies — who were frightened. Genuinely scared by what the immediate future would hold. Folks immediately started curating lists of what to do before January 20th to protect your gender identity, immigration status, (reproductive) health.

We’ve come up past Inauguration Day, and the fear is still palpable. It’s hard to think about the future of museums when you’re so caught up in present-tense survival. But I believe museums are in a unique position to provide strength for the struggle we’re gearing up for.

See, the thing is, these communities are no strangers to resilience. We’ve been through some pretty horrific oppressions before. The queer community banded together in the face of silencing. We sent out magazines and newsletters to secret mailing lists across the country in the 1950s, under threat of prosecution for “un-American activities” if discovered. We met at bars run by the Mafia because they were the only people who would host us. And then, finally, we rose up at Stonewall. It’s been a long, slow march for justice, and it’s still going. But it’s easy for me as a young(ish) queer to take the short view of our struggles. I don’t remember most of the AIDS crisis. I don’t remember the shockwave of joy that ran through the lesbian community when Ellen came out on network TV. I don’t even remember the passage of Don’t Ask Don’t Tell or the Defense of Marriage Act, though I was old enough then that I probably should have been politically aware. And never mind the things that didn’t happen in my lifetime — the “Boston marriages” of the late 19th century or the transgender men who found a way to express their gender identity by fighting for their country in times of war throughout centuries. When I zoom out and look at the long game, the next few years don’t seem so scary. Yes, we’ll probably have some troubles to wade through. Yes, some of our current freedoms may be rolled back. Yes, the next administration has the potential to cause real harm to our bodies. But we’ve been here before.

So what does this mean for museums? Museums are the collective memory of a community. When museums focus on the dominant narrative (usually the straight white male story), we take away the power of history from marginalized communities. I don’t take the long view of queer history because it’s not in our national narrative. I’ve had to seek out the stories of my community and learn our history for myself. The stories of Black and indigenous folks are easier to find, but often still told through the dominant lens. We know about slavery, but not slave resistance. We learn about Native Americans before contact, but their stories are quickly overwhelmed by the white folks’. It’s more important than ever that museums seek out and tell the stories of marginalized communities through that community’s lens. Tell the story of resistance and resilience. Give us hope for the future.

Don’t get me wrong — I know this is much easier said than done. The stories are often buried under years of marginalization. Telling them faithfully requires close collaboration with those communities. There can be institutional barriers, such as narrow missions or hesitant corporate partners, that work to stifle alternate narratives. Ensuring that community members have realistic access to the spaces telling their stories may require some shifts in thinking. But as we move into the future, faithfully telling stories from our whole community will become even more important to maintaining the museum’s audience and relevance. We must be like the Texas man standing outside a mosque with a sign reading, “You Belong,” openly celebrating the community membership of those feeling marginalized.

Fortunately, you don’t have to go it alone. There are others out there doing this work, too. Nina Simon’s blog Museum 2.0 shares her wealth of experience working with community partners in a variety of different contexts. Across the pond, National Museums Liverpool consciously tells the stories of its diverse community. (You can find a video and transcript of the director’s talk at a Museum Next event here.) The Incluseum project brings together “critical discourse, community building and collaborative practice related to inclusion in museums.” This is just a sampling of the resources available on the internet, with many more based locally around the country. Plug into your local community. Ask questions, and listen — really listen — to the answers.

“That’s why we have the museum . . . to remind us of how we came, and why: to start fresh, and begin a new place from what we had learned and carried from the old.” (Lois Lowry, Messenger) Let’s start this new year grounded in the knowledge carried forward by all our communities.

Mac Buff is a genderqueer feminist and museum educator with a passion for inclusive programming. Mac currently works at The Museum of Flight in Seattle, Washington, and writes for Non-Profit Ally (nonprofitally.com).