In a recent article, Alli Hartley and Mara Kurlandsky wrote about the inspiration and goals for the #DayofFacts social media campaign taking place on Friday, February 17. Over the course of the past few weeks, they’ve received a number of questions about the role of the campaign in the broader museum field’s response to current events.

Here, Alli answers some of the more pressing questions posed by registrants. 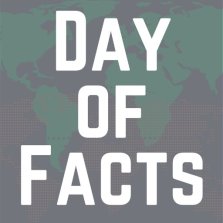 Why use #DayofFacts? Doesn’t the focus on facts seem problematic given that museums interpret multiple perspectives on historical events?

We went back and forth on what the hashtag should be:  the idea was born when “alternative facts” was just entering the public discourse, and the desire to push back on that led us to use the word facts. However, we are aware that if we are arguing that museums can’t remain neutral, using the word facts can be perceived as problematic. Originally, it was suggested that our hashtag reference agencies threatened by budget cuts (#thanksIMLS, #thanksNEH) but we wanted to be as inclusive as possible, appeal to science centers that may not be represented by all of these federal agencies, and include organizations large and small. We also originally considered using the word “museum” in the hashtag, but ultimately decided against it because we knew a variety of institution types (parks, zoos, aquariums) would be interested in participating. Ultimately, we wanted to act quickly, and we trust each institution to make of the campaign what is appropriate for their mission.

How does the concept of object facts fit into the trajectory of museums as a whole?

In terms of how this fits into the trajectory of museums, we can also look to an interesting conversation about the campaign discussed in Laura Schiavo’s “Race, Gender, Sexuality and the Museum” class at the George Washington Museum Studies program.  We present a brief recap here of some of the themes that emerged. Overall, the feeling of museum professionals is that the museum field has changed significantly from being an arbiter of objective truth to an interpreter of history.

Are museums neutral institutions? Isn’t asking museums to take a political stand contradictory to our mission?

The work of #DayofFacts is indebted to many of the colleagues who have opened to new heights the discourse on whether or not museums are neutral space. We couldn’t recap their discussions here and fully do justice to their work, so we’d like to direct you all to look up writings, blog posts, videos by some of the following individuals: Adrianne Russell, Aleia Brown (Adrianne and Aleia are collectively the founders of #MuseumsRespondtoFerguson), Gretchen Jennings, Porchia Moore, Rainey Tisdale, nikhil trivedi, Alyssa Greenberg, Monica Montgomery, Omar Eaton-Martinez, the MASS Action Team, Rebecca Hertz, Sina Bahram, Amanda Figueroa, Ravon Ruffin, Nicole Ivy, Aletheia Wittman, and many more.

While it is financially convenient today to pretend that museums are not political, the history of what is and is not displayed has long been political. One aspect of today’s cultural

landscape that seems counterintuitive is the insistence that state-sponsored (federal museums) or state-supported (federal grant recipients) organizations remain politically neutral. Scholars in the field of public memory and heritage such as David Lowenthal, Maurice Halbwachs, Benedict Anderson and others have argued since the early 19th-century that what a nation-state adopts as its heritage—whether it be through preservation of tangible or intangible cultural heritage, or through museum collections–is one of the strongest indicators of that country’s values.

While America has a rich patchwork of federal, quasi-federal, and nonprofit museums, other countries do not, and looking at examples of cultural institutions who have pushed or challenged the state ideology and state museums are a clear indicator of just how political state-sponsored museums are. For example, the political tensions of Russia in 2015 saw the government eventually acquire, then make the decision to close, the Perm-36 Museum, a museum that told the story of genocide during the Soviet Union. Just last week, the War Childhood Museum opened in Sarajevo, Bosnia. In a city that’s been plagued by a 3-year shutdown and state neglect of the official, state-sanctioned museums due to constant political stagnation, a nonprofit collecting and community-building project has been challenging official narratives and providing a space for vulnerable and unheard voices.

Perhaps we can claim that American museums are different, that political and state cultural systems function under different realities. The truth of the matter is, however, that while our perspective of culture and diversity may have been widened over the past few decades with the increasing diversity of federal historic institutions–such as Stonewall National Monument, the National Museum of African-American History and Culture, and others—we cannot replace lost cultural history or rewrite the histories of our institutions. The Slave Dwelling Project is a grassroots project that exists because sites of slavery were so often overlooked in the historic preservation projects, both state-sponsored and privatized. Collectives and projects such as Occupy Museums and Museum Hue exist because certain voices have been historically disempowered in our institutions.

Museums—even federal museums—are not neutral, and have never been; if they were, would it be surprising or noteworthy that an LGBT or African-American site was being created, or would there be a necessity for significant funds to go towards inclusion? In taking a stand, we acknowledge the history of our institutions is one that is impartial, that has favored certain narratives over others, and has not always been inclusive. We hope that museums can use February 17 as an impetus for more inclusivity, as they share content relevant to the diverse communities who are most affected by the political changes.

How Can an Individual Participate?

We understand that many people who don’t have institutional accounts or institutional voices want to participate. I’m excited for that, not only because I am an educator who facilitates both community and institutional experiences, but because there are certain truths that guide my life that I’m looking forward to sharing in #DayofFacts as an individual participant. For example, next year I am marrying a man, who would not be 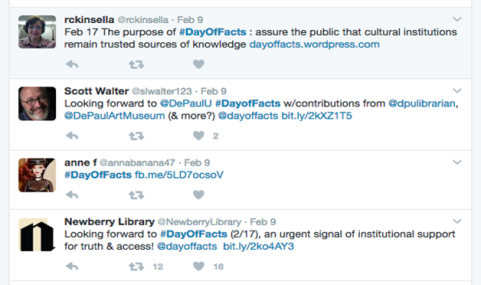 in this country were it not for a generous but unpopular policy towards Southeast Asian refugees in the 1980s.
There will never be a museum for this fact—that my fiancé is the son of refugees—but this is a truth that guides my life every day. On #DayofFacts, I encourage individuals to share individual truths like this one, as well as any other facts that they feel pertinent to the moment. Are you a student who has just finished a research project on refugee-focused museum projects?

We’d love to hear it. Are you a climate change researcher, or research enthusiast, or maybe even someone that worked on a government-funded citizen history or citizen science project? Time to tweet.

What happens to this initiative after February 17? How can this be part of a sustaining action?

I’ve received this question a lot, and it’s something I’ve thought a lot about. Having been part of movements within the museum community that have lost momentum and having faced some burn-out before, I thought it important to begin with one specific action with a “start” and “end” date. After the 17th, we will evaluate our effort. For us, the biggest marker of success will be the ways that the public engages with our content that day if people appreciate that we are being relevant to the moment.

Another marker of success is if the campaign provides cover for the field as a whole to speak out more. There is safety in numbers, and we hope that mass mobilization will allow museums that have been more cautious to feel comfortable asserting their missions and values. There are so many shifts in the political and social sphere recently, it’s hard to predict where we’ll be in two months’ time. But we do know one thing, and it’s a thought we want to leave you on. No matter what happens, our cultural and scientific institutions will be right there with us, unafraid to tell truths relevant to the moment.

Alli Hartley is a multidisciplinary museum educator with an interest in public memory, museums as institutions and social justice. She currently manages history programs and exhibits for a small park. She previously worked at the National Museum of African Art and the College Park Aviation Museum. You can find her at Twitter at @AlliHartley1