Each year I look forward to Museums Advocacy Day as an opportunity to focus my futurist lens on political trends. In the past, I’ve invited attendees to consider the future of nonprofit status in the US, the future of education, and even what advocacy itself might look like in 2026.
This year Gail Ravnitsky Silberglied, the Alliance’s VP for Government Relations and Communications, invited me to share what futures studies has to tell us about dealing with disruptive events. In today’s post I’m summarizing that talk, delivered to our museum advocates last month. I offered some advice about how to filter and prioritize the deluge of news, and channel time and attention to responding to the most important challenges.
As regular readers of this Blog will know, the role of futures studies isn’t to predict what the future will be, but to help us imaging the many different futures that exist within the Cone of Plausibility. Three main forces shape our path through time:
Trends, which proceed in a given direction, at a given speed.

Trends may speed up or slow down, even reverse direction, but their directionality supports forecasts—estimates of where we may be in the future.

Events are specific things that happen with notable results. They are often referred to as “disruptive” events because they only become significant in foresight when their impact is large enough to knock a trend, or trends, off course.
Not all disruptions are bad, of course—think about medical breakthroughs that save lives, or the passage of legislation that protects human rights—but we tend to obsess about the worst possible outcomes. Skip over related stories to continue reading article

The third major agent of change is choice—the actions taken by individuals and organizations (for example, participating in Advocacy Day) that influence the future.
The election of the current administration constituted an overarching disruptive event that has in turn spawned a series of disruptions in areas as diverse as education, environmental protection, and immigration policy. For example: bipartisan support for criminal justice reform has been growing in recent years. However, the Trump administration has signaled it is pulling back from many of these reforms (such as the de-privatization of prisons).
Because there are so many disruptions clamoring for our attention in the daily news, we need strong filters to help identify where to take action. I suggested to the advocates audience that they cultivate a habit of sorting potential or actual disruptions by probability and impact. 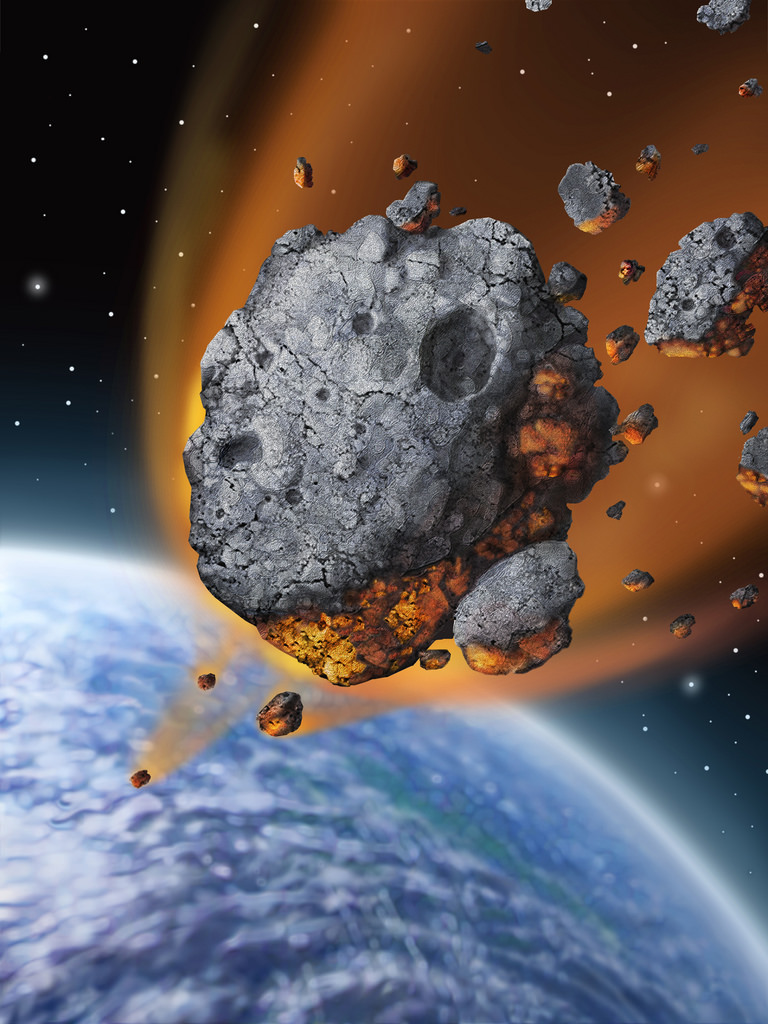 When I run workshops on foresight and invite participants to brainstorm disruptive events, some wag invariably suggests a large asteroid striking the earth. I confess that asteroids seemed like a silly example to me, but it turns out the US government actually does assess and plan for managing this risk by detecting and deflecting what they call Potentially Hazardous Near Earth Objects (NEOs). (And yes, the resulting plans do read like the script for a bad science fiction movie.) Estimates are that we will experience a strike of a NEO:
Something a little less dramatic, and more relevant to museums, is flood risk. Annapolis, Maryland and its museums experience nuisance flood days of up to 40/year. That represents a 935% increase in flood days in the last 50 years—and therefore a trend towards frequent disruptive events! Other risks sneak in under the radar because they are so small, and constant, that we may cease to notice them: for example, the constant small disruptions caused by temperature and humidity fluctuations.
To help manage mental time and effort, I recommended mapping disruptions against the following chart:
Events that fall in the bottom left quadrant (low probability, low impact) you can safely ignore. Events that fall into the upper left hand quadrant (high probability, low impact) call for procedures that help you manage them on a regular basis. (For example, installing an HVAC system to deal with temperature and humidity fluctuations). Events that fall into the lower right corner (high impact low probability) are covered by contingency plans such as disaster preparedness manuals. And events that are high impact, high probability, may require an all-out effort to prepare for the fallout.
Right now a lot of high impact policy decisions seem to be increasingly probable, pushing them up and to the right in our chart. How will museums respond if funding for NEA, NEH and IMLS is eliminated or drastically reduced? White House budget planning documents have called for a $54 billion cut in domestic spending. The budget is said to have been influenced by a Heritage Foundation report that calls for elimination of NEA and NEH. Or what would be the impact of repealing the Johnson Amendment—a provision in the US tax code that prohibits all 501(c)3 nonprofit organizations from endorsing or opposing political candidates?
Once you’ve identified probable high impact disruptions, try feeding them into what futurists call and implications wheel to map potential consequences and begin to think about how you might respond. 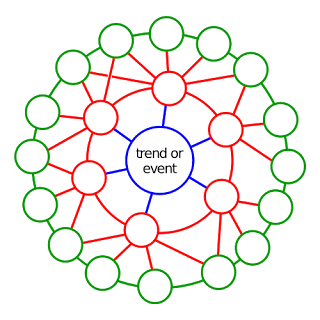 (You can revisit an earlier post from this Blog about the implications wheel here.)
Put the event your focusing on in the middle, and populate the next orbit of circles by completing the statement “if [x event] happens, then [this] could happen next.” Build out each of these implications to identify secondary effects, and so on as far out as you can or need to explore the ripple effects of the initial event.
Here is an implications wheel that asked what would happen if the US used a biological weapon. 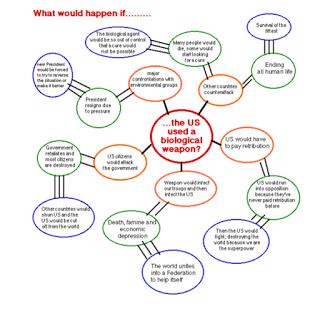 Possible long-term consequences envisioned by the creators of this wheel include the creation of a global federation, ostracism of the US, or the extinction of the human species.
OK, so the consequences of this scenario are more catastrophic than loss of funding, but attendees identified some pretty dire “if…then” statements that would populate a wheel exploring around the elimination of federal agencies devoted to arts and culture. The need to raise more revenue from non-Federal sources, for example. Another person pointed to the potentially crippling effect on international loans resulting from the loss of the federal indemnity program. Perhaps the bleakest outcome, voiced after the talk by one attendee, could be a future in which museums per se become a partisan political issue, identified with particular social and economic platforms rather treated than as a shared public good. But this disruption could pose opportunities as well, for example, the potential for wealthy supporters of arts and humanities to create a private fund to fill the gap left in federal support. That scenario leads to branching implications as well. As another attendee pointed out, the creation of a major private funder might fuel arguments that federal support for museums isn’t necessary. But in the best possible future, NEA and NEH are restored under a future president, and we have both federal and private centralized sources of funding.
As you read the news and draw your wheels, I want you to focus on that third force shaping the future: choice. The choices you make, the actions you take, can help you navigate the tangled web of implications around the current disruptions and hopefully map your way to the brightest outcome.
Elizabeth Merritt, Founding director of the Center for the Future of Museums, American Alliance of Museums