I know that in reality summer is just as busy as any other season, but somehow it feels to me as if I have a little extra time to breath, step back from my daily news feed and expand my horizons. In case you feel the same, here are a few recommendations for blogs and podcasts to add to your own queues. I hope they help you find some kindred spirits and refresh your work.

The newest blog in my feed is A Latina In Museums, where Karen Vidangos shares her thoughts on “museums and the contemporary issues they face.”  In recent posts Karen shared her observations on the 2017 AAM conference, on using social media to reach diverse audiences, and musings about the entry fee (i.e., student debt) required to enter the VIP club of museum work.  (You can also follow Karen on Twitter at @latinainmuseums). 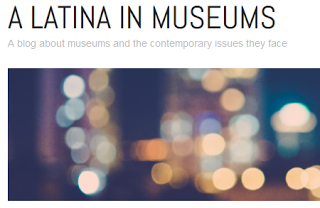 Karen is a newly minted museum studies graduate. At the other end of the career spectrum, Dan Spock has been working in our field since he joined the Boston Children’s Museum as a designer in 1983. Now director of the museum at the Minnesota Historical Society, Dan has launched a new blog–Wunderkammer—to share some ruminations he’s developed in over three decades of museum work. His second post (which went up this week) is Exploring the Emotional Landscape of Risk and Failure. Failure being one of the trends featured in TrendsWatch 2017, I was very interested. (Dan on Twitter is @danspock.)

I also recommend you take a look at the Studio blog, documenting the work of Jeffrey Inscho and his team of “cultural technologists” at the Carnegie Museums of Pittsburgh. This week Jeff launched a series of posts that will document the Studio team’s development of a new kind of mobile experience: a museum chatbot called Muse.  “Muse will leverage the Studio’s user-centered design process and make use of leading-edge technologies like natural language processing and image recognition, to create an artificially-intelligent chatbot capable of providing useful information when a visitor is on-site, as well as surprising and engaging correspondence from afar.” And the Studio crew will be sharing the resulting open source code on Github, so you can build on their work!

On the podcasting front, I am SO HAPPY that after a nearly three year hiatus, Jeff Inscho and Suse Cairns have relaunched Museopunks with the support of the Alliance. The first new episode is a stunner: in The State of Love and Trust, Suse and Jeff interview Dr. fari nzinga of Southern University at New Orleans, and Adriel Luis, curator of digital and emerging media at the Smithsonian Pacific American Center. (On Twitter: @jinscho, @shineslike, @fari_nzinga, @DRZZL.)