Museum 2040—the current special issue of Museum—adheres pretty closely to the usual format of the magazine. It opens with a letter from the Alliance’s CEO, though in 2040 that CEO is a licensed psychiatrist starting a three-year stint as a “rotator” at AAM. Toward the end readers will find announcements about new jobs, though these include positions such as spiritual services director, poet-in-residence and director of fun. Each issue of Museum is anchored by a By the Numbers column presenting a few key facts and trends about the world and about museums. Realizing this feature could play a vital role in orienting readers to the scenario in which this issue is set, I recruited regular contributor Susie Wilkening, principal of Wilkening Consulting, to paint a numeric picture of this particular version of the future. Today on the blog, Susie shares a bit about what went into finding, or fabricating, realistic and credible projections about the year 2040.
Whenever Elizabeth asks me to think about the future, my first inclination is always to start by looking to the past. In this case, my 2040 “By the Numbers” assignment had me thinking of 1994. I was in college, and had a 486 computer on which I wrote my papers … but I checked my email daily via Georgia Tech’s broadband connection. The more things change, the more they stay the same.
The point being, if you had plucked me out of 1994 and put me into 2017, yes, life is different, but we are all humans going through life’s ups and downs, and sustaining our physical lives. My assumption then, for 2040, was the same. Life will be different, yet the same.
Putting together a 2040 edition of “By the Numbers” was fun, daunting, and not that different than creating one for the present. I scanned for ideas, reviewed the issue’s essays and articles, and spent a fair amount of time thinking about the trends I’m seeing in society (and in museums) from my own work.
Thirty-plus ideas later, Elizabeth and I began sifting. The scenario in which Museum 2040 is set reflects a future shaped by current trends—no dire catastrophes, no miraculous good news, just business-as-usual playing out over the next 23 years. For this reason, we tossed out our most pessimistic concepts (such as listing the number of cities submerged by rising sea levels). On the flip-side, since we weren’t being wildly optimistic we had to axe the budget for a new US Department of Arts and Culture. I had thought of highlighting a car museum where you could drive real cars (an anachronism in the 2040 world of autonomous vehicles) but the New York Times kind of beat me to it.
We settled on eight data points from the future that were rooted in today’s reality. Here’s my thinking behind those eight choices: Skip over related stories to continue reading article

An aging population. Demographic change was an obvious candidate for inclusion because of its profound effect on society. Racial and ethnic change pervade the 2040 issue in many ways, but the dramatic aging of the population (and practically stagnant population growth for children) wasn’t so obvious in the stories by our authors. I clearly needed to highlight that shift, and went to the US Census Bureau’s population projections to pull “real” numbers. Done.
6,152,440 kWh of energy generated by the 20 largest science centers. I’ll be honest. I had no idea how to make up credible numbers about renewable energy, so I turned to my friend and energy engineer, Jim Guertin, for help. Although we discussed multiple renewable sources, we decided to keep it simple and focus on photovoltaics. Jim then made energy generation estimates (less consumption), and sent me a crazy spreadsheet. I researched how much energy the typical house uses today (as good an estimate as any), and suddenly those 20 science center were powering 569 homes. (This doesn’t even count those other possible renewable sources, or other museums!) 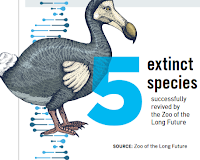 5 extinct species successfully revived by the Zoo of the Long Now. Honestly, I just pulled that straight from the “What’s New” section. And the illustration was a no-brainer. It had to be a dodo!
2,132 museum schools serving more than half a million K-12 students. I give credit to Elizabeth for instigating this statistic. My job was primarily to say “let’s pull back on your lovely yet optimistic number a bit.” We compromised at 2,132.
18 percent increase in percentage of American adults visiting at least one museum per year. The 2017 number for the graph was easy: AAM’s Museums and America 2017 sampling (forthcoming) showed that 33% of Americans had visited a museum in the past year. But 2040? Since just over half of families with young children visit museums today, we thought that was a reasonable stretch goal for the entire population. So, 51% … an increase of 18 percentage points.
Health and wellness: This summer, I had spent a fair amount of time reading reports linking cultural consumption and well-being (you can find my reviews at The Curated Bookshelf). Then three different essays in the issue also focused on this theme. Obviously, this was important, so we devoted three graphics to it:
$425 million in impact investments in museum programs to improve health and wellness outcomes. I assumed Jessica Liu-Rodriguez (Funder Spotlight, page 37) wasn’t alone in wanting to see more health and wellness impact, and came up with a reasonable (though imaginary) 2017 number, plugged it into an inflation calculator, and got $425 million. 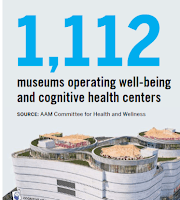 1,112 museums operating well-being and cognitive health centers. Given the rather conclusive evidence finding that challenging one’s mind aids cognitive health, the well-being and cognitive health centers were obvious … and 1,112 within the realm of possibility.
But what about health and wellness in daily life? The Newport Cultural Ecosystem (Accreditation Spotlight, page 39) provided a case study of a holistic cultural organization that would likely be at the forefront of health and wellness. Being a small city, it wouldn’t be as challenging to engage the medical community and get measurable results. Thus, 12% of Newport, RI residents receiving a medical prescription to visit and engage with the Cultural Ecosystem.
Some of these numbers are made up, and some are just a bit optimistic. Yet they are also rooted in trends and data that are real and possible for museums build on. I’m excited about the opportunities we all saw for museums in 2040, and the meaningful impact those new initiatives would have on individuals and communities. Now our job is to make that optimistic future a reality.
Susie Wilkening (@susiewilkening) is the principal of Wilkening Consulting. She has 20 years of experience in museums, including over ten years leading custom projects for museums as well as fielding groundbreaking national research on the role of museums in American society. She resides in Seattle, and is working hard to raise her two young children to be empathetic, creative, global citizens … by taking them to museums early and often.
Susie shares her latest research and data insights at The Data Museum, and book and research reviews on The Curated Bookshelf.
Elizabeth Merritt, Founding director of the Center for the Future of Museums, American Alliance of Museums