This is the second of two posts exploring IRIS+, an AI chatbot at the Museum of Tomorrow in Rio de Janeiro, Brazil. In part one, Daniel Morena, founder and creative technologist at of 32Bits, described the program, how it operates, and how it fits into the overall museum experience. In this post I interview Eduardo Carvalho, Artistic Editor, Leonardo Menezes, Content Manager, and Daniel about how they approached the design of an AI chatbot that would literally become the voice of the museum.

Q: Can you start by telling us a bit about the Museum of Tomorrow? What is your mission?

A: The Museum of Tomorrow is the most visited museum in Brazil – and we are a science museum, which is amazing. The building was projected by the Spanish architecture Santiago Calatrava. He drew the building inspired by a flower from Atlantic Forest, the most endangered Brazilian biome. 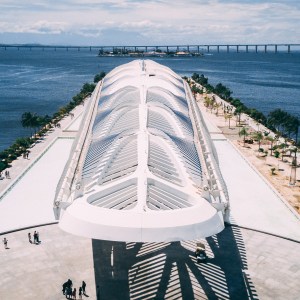 Regarding the storytelling, the Museum of Tomorrow invites the visitors to think about their actions today and the impacts of those in the future. As our curator, Luiz Alberto Oliveira, always says: “tomorrow is today and today is the place for action”. We want to encourage nowadays generation to promote a transformation for the next ones, thinking about the challenges for the next 50 years.

A trip through the Main Exhibition begins with the Cosmos, where all life is contained. In the Cosmic Portal, a 360° dome, visitors are taken on a unique visual journey through galaxies, deep into the subatomic world of elementary particles, and into the center of the Sun. They witness the formation of the Earth and the beginning of life and the birth of thought.

After exploring the Universe, visitors discover the unique conditions that fostered life on the planet along with the development of human intelligence and culture in the second area on the exhibition narrative: Earth. In this area, visitors experience the realms of “Matter”, “Life” and “Thought”. The contents are distributed in three cubes, with information outside and inside them.

After the visitors learn where they come from (the Cosmos), and about how they fit into the environment of the Earth, it is time to reflect upon where we, the human species, are now. Studies show the world’s population will reach 10 billion by the year 2060. The amount of change likely to occur over the next 50 years will be greater than that of the past 10,000 years. The impact of man’s activities on the planet and on geologic processes is shown in the Anthropocene, the epoch of the humans, the central experience of the Museum of Tomorrow, both conceptually and architectonically. The exhibition aims to show the significant ways mankind is affecting the planet, and that while humans are causing long-lasting changes, the choices we make today can shape the future.

Once they’ve glanced the reality of humankind today, visitors move on to explore the future. This fourth area, Tomorrows, looks at trends over the next 50 years and the possible resulting scenarios. The exhibition aims to help visitors understand that these outcomes are the results of our actions today. Visitors are encouraged to pose the questions, “How are we going to live on the planet? How can we coexist? What will become of us? How will society deal with these tomorrows?”

The area called Us, the last part of the Main Exhibition, features a light and sound display. The setting is based on an “oca”, an indigenous house of knowledge, where the elders share cultural information and wisdom with younger generations. The “tjurunga”, an object used by Australian aborigines to symbolize the passing on of knowledge, is central to this area. It can be considered among the most ancient artefacts ever created and is the only physical object in the main exhibit.

Q: I’m interested in how you thought about who IRIS+ should “be.” Since she is literally speaking for the museum, how did you decide what she would sound like, or what kind of personality she would have?

A: Museum staff wanted to give IRIS a personality that embodied the values of the museum, which are: joy, optimism, compromise, cooperation and affectivity, trust, and respect. We wanted her to fight for sustainability, and encourage visitors to consider plural tomorrows. We believe that everybody should have a voice in thinking about the future, and every conversation IRIS has, has something to do with that. And we want IRIS to have opinions. For example, IRIS is programmed to detect racism, misogyny, homophobia and intervene, to say that “this is not how the museum thinks that the future should be.”

A: It’s a pun, playing on the logo of the museum, which looks like the IRIS of the human eye. Also, the project was inspired by the film Her, which got a lot of attention. (Her is about a romantic relationship between a man and his AI assistant.) We felt that was serendipitous. Also we felt it was more welcoming to have a female voice. The actual voice selected by IBM is called Isabella.

Q: How did you end up working with IBM on this project?

A: It started with IBM becoming a sponsor of the museum, which led to IBM staff holding workshops about design thinking in the museum’s lab space. In those workshops, museum staff generated ideas for projects, and IRIS+ was one of three. IBM had already done the Voice of Art at the Pinacoteca museum in Sao Paulo, so they had some experience creating AI-powered museum chatbots. The goal of IRIS+ was to take the visitor out of their passive position to an active one, inspiring them to take action and change potential futures.

Q: How did you go about designing the chatbot?

A: Implementing IRIS+ was a six or seven step process, through a series of weekly design sprints, which are very much a part of IBM culture. One of the early sprints identified the personality of IRIS+. (She has a sense of humor. She even laughs.)

The IBM team developed a structure to train IRIS+ by collecting email replies from over 1000 people whose email addresses provided by visitors when they registered for the cards they use to interact with the existing IRIS program. We encouraged people to be as open and spontaneous as possible. This helped us identify what concerns people had about the future, for example, sustainability, or violence. We didn’t reveal to the early test volunteers that IBM Watson was behind IRIS+, because we wanted to preserve an element of surprise.

Then the programmers created a feedback loop generating new questions based on the replies of the first step, and recruited a volunteer group to ask questions and help refine the loop.

Q: Please tell our readers more about how the museum’s values are incorporated into the programming.

A: Well, inside the administrative interface (which users don’t see), a series of decisions take place: the first question (with variations, to make it seem natural), then a response, directed through a chat process to choose a response in order to interact with users. These conversational pathways and suggested actions reflect the position of the museum: how to fight hate speech, fake news, or uncivil behavior. 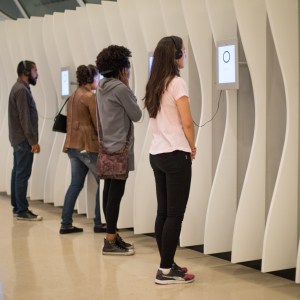 The recommendations are designed to make it easy for a visitor to actually connect with an initiative related to their concern. We sorted concerns into categories (e.g., environment, violence) and sub-categories. For example within the environment, we have subcategories of air, ocean, deforestation, sea level rise, etc. Now we have about 100 issues indexed, and creating more as the public raises new issues. We made sure we tested the experience with about 700 people of different ages from different places to get different perspectives, based on their own realities (like kids from the city talking about violence around their homes).

We tabulate and rank concerns based on visitor responses. People can be anonymous but are invited to contribute more info. The birth date is used to filter out data from minors and make sure it isn’t publically displayed. Knowing a visitor’s place of residence enables us to suggest actions or projects near to them, which increases the chance people will follow through on the recommendations.

A: Now we are in phase two of the project, trying to refine our understanding of what concerns people have by location and age. We hope, in the long run, obtain the information about the approach of our visitors with the NGOs partners.

This way will answer some questions about the performance of IRIS+, like if “there was some connection between the user and the social project?” and “which type of social work our visitor was engaged and how this helped the NGO?”.

The project with IBM will receive an update to put “information bullets” about the Main Exhibition, so that someone, who just even glimpsed the exhibition, can reflect about the issues presented in our interactives and experiences.