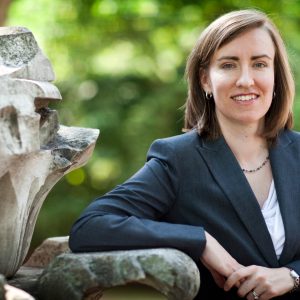 It is an unusual feeling as a medieval art specialist for my subject to suddenly feel globally significant. I suspect some of my colleagues in Renaissance art feel this as well. For those of us who have studied art created after the Black Death of 1348, or the Plague of London in 1665, or during the wave of epidemics that washed over Italian cities every few years between 1500-1700, our current pandemic has felt familiar and brought our knowledge to the forefront.

Just before the museum closed, in fact, two epidemic-related objects from our permanent collection at the Fralin Museum of Art at the University of Virginia were on view—a processional cross and a sculpture of Saint Sebastian, both from the fifteenth century.

The processional cross would have been carried through the streets during epidemics, as city ecclesiastic officials attempted to quell what they saw as divine punishment on a sinful society. This was their only explanation for the devastation of disease, and penance was their sole cure.

People would have prayed over the sculpture of Saint Sebastian—the arrow wounds of his torture resembling the buboes of bubonic plague—that he would intercede on their behalf. Unbeknownst to the clergy, the processions only served to spread contagion. But psychologically, they must have helped bring hope to a hopeless, terrifyingly inexplicable situation.

On a tour ten days before our state instituted social distancing measures, I pointed these objects out to a professor of epidemiology and his graduate students and laboratory staff, who had come on a special outing to celebrate a grant they had won from the NIH. The relationship between the museum and the university’s medical school was well-established at that point. Since 2013, the two have partnered to create Clinician’s Eye workshops for medical students, using visual art analysis to improve the core clinical skills of observation, communication, and collaboration.

We developed the program as part of a growing nationwide trend of partnerships between medical schools and nearby art museums. The two-hour workshop challenges its participants to slow down their looking and truly observe, inventory, and articulate—in a non-judgmental way—what they see before them. Small group exercises involve mindful attention, description and interpretation, teamwork, and communication. It culminated last fall when the entire second-year medical class—160 students—came to the museum to participate in four days of workshops.

Our collaborator in this project is Marcia Day Childress, an Associate Professor of Medical Education in the School of Medicine’s Center for Health and Ethics. In mid-March of this year—just as I was beginning my journey working from home and guiding a second-grader through online learning—she reached out to ask if there was anything in our collection that could enhance a new class she and her husband Jim Childress (a professor emeritus of ethics) were developing. Entitled Confronting Epidemics: Perspectives from History, Ethics, and the Arts, the class was required of 305 third- and fourth-year medical students who had been sent home from clinical rotations to wait out the pandemic. Did I have any examples to recommend to expand the class into the visual arts?

This is the sort of moment an art historian lives for.

One of the things I have observed from researching art of past epidemics is how similar some of the images are to those now presented to us on the evening news or on our social media feeds. So I recommended an image from the manuscript The Chronicles of Gilles Li Muisis, a fourteenth-century depiction of the citizens of Tournai (Belgium) burying plague victims, depicting rows of coffins being carried to a burial pit, because it calls to mind the images coming to us now out of Brazil of backhoes digging rows upon rows of graves. The Walters Art Museum in Baltimore has a similar depiction, a painting by the Netherlandish artist Josse Lieferinxe from about 1500, of the burial of wrapped bodies into what appears to be mass graves. Above, St. Sebastian appears kneeling in the clouds, appealing to God on behalf of the souls of the departed and for mercy for the living.

Today’s photographs of refrigerated semi-trucks parked behind hospitals are the twenty-first-century version of seventeenth-century prints depicting cartloads of wrapped bodies being collected in the streets of London in 1665. It is for this reason that I also recommended Goya’s Cartloads to the Cemetery, for that is what these physicians will ultimately do.

This is not the first time I have used the collection to talk about issues around death and dying. In 2014, the student-run group HeArt of Medicine, which seeks to improve knowledge and comfort with end-of-life care for medical and nursing students, reached out with the same question. Together, we created a workshop at the Fralin that utilized works in the collection dealing with different aspects of death. Francisco Goya, Kathe Kollwitz, William Hogarth, Vanessa German, and Bruno Civitico were just a few of the artists we discussed who had something to say visually about the moment of death and its effects on those left behind. This workshop underscored for participants how profoundly death affects each one of us, though it is mostly hidden from the public eye behind hospital walls, even now in a time of COVID. Perhaps because of this, the students were eager to address it. One year, the Fralin had forty-five RSVPs to our workshop, only to have seventy-five people arrive ready to participate.

As I look toward our own uncertain future, I have thought about Londoners coming out of their quarantine in November of 1665, during which 20 to 25 percent of the population perished between the beginning of May and September. Naval administrator and diarist Samuel Pepys wrote, “at my old oyster shop in Gracious Streete, bought two barrels of my fine woman of the shop, who is alive after all the plague, which now is the observation or inquiry we make at London concerning everybody we knew before it.” It is a surreal return to market-shopping normalcy, when people began to tentatively come together, share their trauma, and find out who had survived.

M. Jordan Love is the academic curator at The Fralin Museum of Art at the University of Virginia. She has overseen the education department since 2012. Love’s career as an architectural historian, educator, and museum curator spans more than twenty years.