“We were…they just pinged us, pushing it up a half hour.”

“Of course they did. When will I learn?”

Dashing into the conference room I plunk myself down next to Manuela just as the table beeped softly and the air screen shimmered into view. “CONNECTING” it flashes, displaying the head shot and bio of our contact at the Senator’s office, just as the intern herself resolved on the screen, looking slightly harried.

“Hello Melodie! I’m Elizabeth Merritt, director of the Museum of the Future, and this is the museum’s community liaison, Manuela Rodriguez. Thank you for making time to see us today!”

“My pleasure. I apologize for being a little rushed, but we have an important vote coming up on the Life-Long Learning bill in just a little while. How can I help you?”

“We’re participating in the 18th annual Museum Advocacy Day. I appreciate that you’re very busy. The Triple L bill is very important to museums, so we don’t want to keep you.” I touch the files Manuela has queued up at the side of the airscreen and drag them over Melodie’s desk. “Here are briefing sheets on our three major issues this year.” Manuela smoothly takes over, walking Melodie through our well-practiced summary, making sure to pull out and display photos of the Senator attending the museum’s opening ceremony last year, and of teens from the Senator’s favorite local project, the Real World Science Academy, working in our labs with visiting scientists. I surreptitiously glance at the time display in corner of the screen, noting we’ve almost used up the traditional 3 minute time block.

And indeed, I can see Melodie’s gaze straying to the seemingly blank space in front of her that holds her screen’s display. “We’d like to ask the Senator to sign the “Dear Colleague” letter Manuela showed you, Melodie.” I chime in. “Can you give us a read on whether she will do that?” Political interns become adept very quickly at avoiding commitments their reps don’t want to make, and Melodie is no exception. “I’ll make sure she sees it,” she says brightly. “I think she’d be interested on those statistics you mentioned about employment rates of participants in your passion-based learning program. Can you provide details?” “Sure thing, we’ll send those right along. And please tell the Senator we’d would be very happy to have her visit the museum to see the program for herself.” “Thank you so much for the invitation!”

After a closing flurry of pleasantries Melodie fades from view and the screen disappears. “I thought that went pretty well,” Manuela says, tentatively. “Not bad at all!” I enthuse. “You did a great job of presenting the issues.” She beams, “Thanks! Reading the new edition of Speak Up for Museums really helped. It has a lot of advice on virtual advocacy that helped me put together the presentation.” “Your comment about the Senator’s pledging her support for that other teen learning program was brilliant. How did you know that?” Manuela blushes. “I took a tip from the book and reviewed the public video archive of recent advocacy visits from other cultural institutions in our town, and stumbled across that. It was a little creepy to think we were going to be recorded…but might as well make use of it!”

What indicators suggest a future in which most advocacy is conducted virtually, rather than face to face?

The current system, as this past Tuesday brought home to me, reflects the 18th century, agricultural, pre-technology country we were when Congress first convened. When not many people (relatively speaking) trekked to the Capitol for a face-to-face with their representative, because, in part, in 1790

But things just puttered along for a couple centuries, trending to the “expected future” that is now, as the system that channels constituent/representative visits swelled to accommodate hugely more people.

This can’t work forever. Even if the current trends, in population, costs of travel, and incremental tightening of security continuing at the same rate and speed would make the system eventually unsupportable. And the system is very vulnerable to disruptive events, particularly security breaches. I’ve reluctantly concluded I will never again be able to breeze into the airport a half hour before my flight, with the soymilk I brought from home. Constituent visits could experience the same shift.

The recent assault on Congresswoman Gabrielle Giffords has already raised awareness of the vulnerability of politicians at traditional local appearances. Another such incident could tip the balance, making informal public appearances in the community by senators and congressional representatives rare and costly. Similar events could erode the so-far stubborn resolve of Congress to be relatively accessible, by Washington standards. To get into the Hart Senate building for my real Advocacy Day visit last Tuesday I just had to go through the inevitable scanner (which I flunked the first time around, because I was wearing a big chunk of jewelry.) But I didn’t have to provide my personal information ahead of time, to enable a security screen, and no one checked to make sure I had an appointment. What happens if (when?) some deranged constituent seriously injures a representative or staffer in the office buildings?

The flood of invitations, complimentary publications, fact sheets and testimonials flooding a Congressperson are already going virtual. One of the questions at the Monday training sessions for Advocacy Day was “what’s the best way to send information and materials to my representative?” Since the anthrax attacks of 2001 all the mail going into the congressional offices are irradiated, rendering them nicely brown and crispy. So, our trainer advised, the best thing to do is to send your spiffy documents as electronic attachments.

The scenario I sketch above is a tiny bit futuristic, technologically, but there’s nothing to keep virtual visits from happening right now. And virtual conferencing will only become cheaper, more available and higher quality as time goes on. (I don’t think I will have to wait 25 years for my airscreen!) And if, as Manuela discovers, virtual visits are recorded and archived in a searchable, database, it will provide a level of transparency and accountability that Wikileaks can only dream of.

Stay tuned for Advocacy Day 2026 part two, where I give you a peek of what the issues briefing sheets in this future may be about… 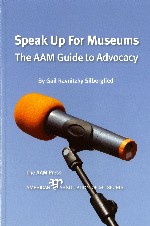 If you want to experience an old-fashioned press-the-flesh Advocacy Day before it becomes a thing of the past, plan to join us in 2012. And you can order the first edition of Speak Up For Museums (newly released!) here. 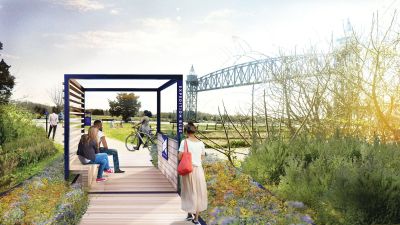