“The function of science fiction is not always to predict the future but sometimes to prevent it.”—Frank Herbert


This week’s guest post is by Kat Burkhart, executive director and curator of the Carnegie Museum of Montgomery County. Kat is a not-so-closeted sci-fi fan who offered to contribute to Futurist Friday from her reading list of favorites. 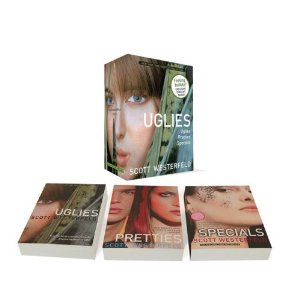 In a previous CFM Blog post we were encouraged to read more science fiction. Here is one selection with a new twist on an old theme. If you enjoyed reading the Hunger Games, you should appreciate this series as well. Enjoy some light reading over the holidays.

Good science fiction includes imaginative world building in addition to a quality plot. Scott Westerfeld’s series Uglies, Pretties, Specials and Extras builds a futuristic world we can recognize as not to distant from our own.

Set 300 years in the future, after all oil was violently destroyed by a bio-engineered microbe, this coming-of-age tale conforms to all the standards of traditional dystopian science fiction, with a fresh look at an old tale. Partially inspired by the 1964 Twilight Zone episode Number Twelve Looks Just Like You, the premise of the books is that at age sixteen everyone either undergoes massive plastic surgery to become “pretty”—just like everyone else—or runs away to live in the wild. Those that turn pretty have all their needs met and spend all their time partying and having fun.

In classic science fiction mode, the story showcases new and amazing technology, such as hoverboards, hoverstruts and hovercars and lots of nanotechnology. It also includes interface rings and body sensors which connect the wearer to the electronic world. Without the interface it is as if a person doesn’t exist- doors won’t open and elevators won’t respond. “Smart” cars will run over someone who is not connected to the system.

Something for us all to think about in the era of Reduce, Reuse and Recycle.

Recycling without reuse—everything is completely disposable.

“She turned her gaze to where it had fallen. Discarded, the plastic mask had recycled itself, turning into pink dust, which the carpet in the elevator was already filtering away.”

In Westerfeld’s world everything is recycled; if something drops, the five second rule applies because after that it’s gone. Clothes and accessories are not cleaned or repaired; they are recycled into new ones. Objects are impermanent and little if anything is saved to be shared or passed from one individual to another. Everything is cheap if not free and always instantly available, but almost everything is disposable.

The Smoke, a place of runaways and rebels, has a trading post because outlaws do not have access to the city made items. Here most necessary objects are made by hand and traded or handed down from person to person. Presents are precious because they are not disposable.

Some current real life issues that the first book, Uglies and this series encourage us to consider:

If you read this series, or other works of science fiction, try to draw connect the fictive future state with things you observe happening now. The future always as a toehold in the present. And as I read, I always find myself wondering what museums would be like in the worlds created in works like this. For example, if all material goods are transient and everything is instantly recycled, would museums be seen as transgressive, or valued more than ever? —E. Merritt