This article originally appeared in the September/October 2012 edition of Museum magazine.

Once upon a time, pirates prowled the high seas in search of precious metals and jewels. But for The Children’s Museum of Indianapolis and its new content partner, Indiana University professor and underwater archaeologist Charlie Beeker, the treasure is knowledge and the booty is history revealed. Unique partnerships have put never-before-seen artifacts on exhibit in a pioneering effort to create “living museums of the sea;” a designation that allows discovery sites to be preserved undisturbed for public view.

The world’s largest children’s museum has joined forces with the university, the Dominican Republic government, National Geographic, and Eli Lilly and Company Foundation to share valuable pieces of history with millions of children and families. The story begins in December 2007, when Beeker’s work made international headlines: He had identified a shipwreck in the Dominican Republic as the vessel belonging to accused pirate Captain William Kidd, famous for exploits in the Caribbean and Indian oceans during the late 17th century. Beeker has worked with the Dominican Republic government for more than 20 years, identifying areas off the coast believed to be the resting ground for several historically significant ships. 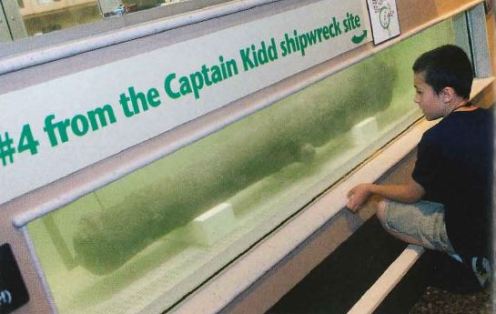 Museum President Jeffrey Patchen saw an article about the discovery and asked staffers to gather more information. The museum has a long history of turning compelling artifacts into immersive contextual family learning experiences, using hands-on elements. We augment these experiences with sound and light shows and actor/interpreters who bring the stories of the artifacts and their locations to life. For us, the discovery of a potential pirate ship with real artifacts was an opportunity too good to pass up!

When I called Charlie Beeker for the first time, I shared a little information about exhibits of ours that involved real artifacts and relied on key international partnerships, such as “Tutankhamun: The Golden King and the Great Pharaohs” and “Take Me There Egypt.” He was interested in learning more and wanted to explore an alliance that might bring the story of Captain Kidd to life, sharing it with children and families.

For the museum, that feeling was mutual. “We have an intense desire to take an active role in discovering, investigating and sharing these sites with our family learning visitors in extraordinary and compelling ways,” says Patchen. “We wanted to share the real science of how these incredible artifacts are recovered and preserved and demonstrate how science reveals clues and insight into our past.”

While Beeker had planned to do academic research on the shipwreck, he also liked the idea of reaching a younger audience. “It’s the 21st century now, and the days of archaeology in a basement lab are over,” he says. “To be able to reach out and share with children and their families in a public area is incredible. We call it ‘Future Divers of America.’ If we can get the preservation ethic out to kids and their families now, we can save huge chunks of history. This is the cutting edge of bringing treasure to the world, and we don’t want to lock it up behind closed doors where only a select few can enjoy it.”

Part of my pitch to Beeker was our successful relationship with the National Geographic Society to produce the traveling exhibit “Maps: Tools for Adventure.” This exhibit featured real explorers who were seeking (and finding) amazing sites with maps. As it happened, National Geographic had also filmed some of Beeker’s expeditions, including the story of Captain Kidd. We then contacted National Geographic to see if they would like to be involved in this early concept. They would become the title presenter of the resulting exhibit, “National Geographic Treasures of the Earth.”

At Beeker’s invitation, Patchen and I were able to experience the magic of the Dominican Republic site. Beeker prepared us for snorkeling on the site by sharing maps he had meticulously drawn, showing the location of cannons that had been found there. jumping off the boat off the coast of Catalina Island, I was stunned by what I saw: real cannons on the ocean floor, just 10 feet below! At this point, Patchen and I were convinced we needed to present this historical treasure to the general public through an immersive exhibit.

Beeker then showed us the Dominican Republic’s Oficina Nacional de Patrimonio Cultural Subacuatico (ONPCS) laboratory and introduced us to its chief conservator and lab director, Francis Soto, and Pedro Borrell, the country’s administrator for archaeology. The lab has an incredible trove of world-class objects from many shipwrecks. The staff was carefully preserving these materials, and we were hopeful we would be able to partner with their office to produce “Treasures of the Earth” along with National Geographic.

With the cooperation and support of Indiana University, along with expertise and objects from the lab at ONPCS, an exciting immersive family learning experience took shape. Complete with one-of-a-kind nautical instruments, precious cargo on display and a replicated cannon pile that children can climb on and explore, the exhibit replicates the actual sea floor where the shipwreck was found. We opened the exhibit with much celebration last June and keep it fresh by introducing newly discovered artifacts on a regular basis.

In addition to Captain Kidd’s Dominican Republic shipwreck location, the exhibit highlights two other recreated archaeological sites: the Terra Cotta Warriors in Xian, China, and Pharaoh Seti’s tomb in the Valley of the Kings, Egypt. One of the most popular aspects is the custom-made tank and wet lab. Here, children and families can see how real scientific processes help uncover artifacts and reveal clues surrounding their history. This setting also allows visitors to talk directly to archaeologists, learning how these treasures are maintained for further study and conservation; preserving them for future generations. Families are encouraged to follow the path of the ship, explore the cannon pile and search for clues that reveal the true history of the ship. The exhibit really comes to life through dynamic gallery theatrical presentations, including actors and actresses portraying the farmer who found the Terra Cotta Warriors in the 1970s, an archaeologist discovering the new tunnel in Seti’s tomb and Captain Kidd himself!

The exhibit was a hit, but there was more work to be done and more shipwrecks to be discovered. In search of more funding to help finance future expeditions, the museum forged a relationship with the grant-making foundation of pharmaceutical giant Eli Lilly and Company. “This project allows us to address our commitment to both science education and community development,” says Rob Smith, president of the Eli Lilly and Company Foundation. “It inspires children and families to learn more about this amazing discovery and the science behind it, including the extraordinary techniques used to bring these treasures to the surface and how they will be preserved for future generations. In short, this exhibit underscores the value of science and research, and does so in very fun, exciting and engaging ways.”

A $1 million grant to the museum from the foundation helped support further expeditions to the Dominican Republic and enabled the museum to feature the 310-year-old Captain Kidd cannon in our lab. A trip this March by the team from the museum and Indiana University yielded new clues about the resting place of the Spanish merchant vessel, Nuestra Senora de Begona. Documentation following the wreck of the Begona in 1725 indicates the ship may have carried smuggled treasure, hidden in the fake bottoms of wooden chests to avoid taxation by the Spanish crown. The team discovered several artifacts, including two clumps of priceless coins. The group plans to return later this year to look for the hull of the ship, and also believes it has located more ships, including one from the 1495 Lost Fleet of Columbus, a 1789 French slave ship and two 17th-century vessels helmed by Henry Morgan-an admiral of the Royal Navy, privateer and pirate.

In addition to representatives from the university and our museum, the Peace Corps, U.S. Agency for International Development, U.S. Embassy in the Dominican Republic and several Dominican Republic agencies are working together to uncover and preserve history as well as the integrity of the Captain Kidd and Begona sites. “Our organizations work closely together to research and investigate unique shipwreck sites, with the common goal to bring some of these historic treasures to younger generations so they can appreciate and learn from them, while the Dominican Republic still protects the original sites as ‘living museums in the sea,”‘ says Patchen.

“It has been a pleasure working with Indiana University and The Children’s Museum in my country,” says Soto of the ON CPS. “Their professional teams are not only helping to protect our underwater shipwrecks by making living museum parks, but also by making the world aware through public displays at the children’s museum.”

Visitors are thrilled to see these real treasures. “We can’t believe that these artifacts have been buried at sea for three centuries and we get to be the first in the world to see them,” says Gloria Armanza of Cincinnati. “It’s absolutely incredible. My grandchildren want to be explorers now.”