This article originally appeared in the September/October 2012 edition of Museum magazine.

Natural history museums are stuffed to the rafters with evidence of evolution; from dinosaur bones to clams, from mammal skins to jars of preserved fish. Yet most visitors would probably tell you that you can’t see evolution happening.

To dispel that misconception, a partnership between a research center and a museum is putting evolution on exhibit; demonstrating that things are evolving right before our eyes. Michigan State University Museum (MSUM) in East Lansing has joined with the National Science Foundation’s BEACON Center for the Study of Evolution in Action to bring observable evolution to the public. For the “Evolution in Action” exhibition project, the museum and the center are working together to develop five years-worth of exhibits. Research from BEACON’s collaborative teams of scientists and engineers will provide the foundation for exhibits on the basics of evolution, evolutionary processes and the application of these processes to engineering and design.

Underlying “Evolution in Action” is the idea that evolution is an algorithm: Variation within a population, inheritance of traits and differential reproductive success equals evolution by natural selection. Evolution can be observed in nature, a lab or a digital environment, and its mechanisms can be used to understand organisms or engineer machines.

But the main idea MSUM and BEACON would like visitors to take away is that evolution is happening now. Ignoring, if possible, the controversy that surrounds the teaching of evolution, this remains a difficult concept for many people. It is not uncommon to find adults and children alike who think that evolution is too slow to observe, happened only in the past or applies only to a physical form—not to behavior, digital environments or engineering. The exhibition project aims to stretch visitors’ thinking, moving them from “evolution is a fossil” to “evolution in action.”

BEACON researchers focus on this present-day evolution. Coming from biology, computer science and engineering backgrounds, they work together on projects in which they can hone in on evolutionary mechanisms at work. Their research tackles topics like how species diverge (speciation). how behavior evolves and how computer programs can use the principles of evolution to develop safer cars or smarter robots. For example, BEACON researchers Xiabo Tan, Philip McKinley and Janette Boughman use computers and mathematical models to evolve robots capable of complex, flexible behavior such as navigating their own way to a destination (rather than obeying directions). Their robotic fish could swim around a lake as a school, monitoring the water and sending information back to a computer. “This cooperation will better enable the robots to monitor underwater environments for us,” a text panel in the exhibit tells visitors.

Exhibit topics were chosen from BEACON research to highlight the ideas of evolution in action. The exhibition, which officially opened in December of 2011, occupies MSUM’s West Gallery, complementing the existing Hall of Evolution that features the traditional displays of fossils, dioramas and mounted skeletons. A central hub, scheduled to open in 2013, will offer an introduction to the concept of evolution in action and to the changing menu of exhibits that will illustrate it; it is being developed in cooperation with staff at two other BEACON partner institutions: the Texas Memorial Museum and the University of Texas at Austin. As of this summer, two exhibits were open in the gallery: “50,000,” featuring Richard Lenski’s work on the bacterium E. coli, and “Hyenas Rule,” featuring the work of Kay Holekamp and Risto Miikkulainen on modeling hyena behavior.

The exhibit “50,000” follows 50,000 generations of E. coli grown in the Lenski lab over the past 23 years. Graphic panels invite visitors to calculate how long it would take humans to produce 50,000 generations, demonstrating that bacteria are good study organisms for evolution because of their quick generation time. This short generation time also allows visitors to observe evolution (albeit secondhand) as younger, fitter generations of E. coli with beneficial mutations out-compete their ancestors.

Julie Fick, education specialist at MSUM, acknowledges that it’s challenging to present 50,000 generations of evolving bacteria in an exhibit. For starters, they’re hard to see. The exhibit features enlarged photographs of the bacteria and cartoon E. coli mascots, but Fick also wanted to include exhibit elements that would engage middle school students and maybe even interest them in science, technology, engineering, and math (STEM) careers. The result is a series of panels and interactive elements including a video tour, hosted by a fifth-grader, of the Lenski lab. “How many people get to go into a research lab? Very few, so here we’re going to take you into a research lab,” explains Fick.

“Hyenas Rule” features the work of zoologist Kay Holekamp and computer scientist Risto Miikkulainen. Holekamp studies the evolution of cooperative behavior and communication in hyenas. Miikkulainen’s work focuses on transferring biological mechanisms (like the driving forces of evolution) to engineering and computer science. For example, Miikkulainen’s past work used evolutionary algorithms to teach artificially intelligent robots to cope autonomously with changing environments and situations. In addition to studying hyenas in the wild, Holekamp partners with Miikkulainen to study, within the lab, the evolution of behavior.

“Dr. Miikkulainen uses sophisticated computer modeling to help us understand why modern hyenas behave the way they do,” explains Holekamp. “He and is students can set a suite of environmental conditions and look at what behaviors evolve over thousands of generations in only a single day in the computer, whereas we would have to wait several years per generation to see these changes take place in real hyenas.”

Photos, panels, videos and mounted specimens illuminate Holekamp and Miikkulainen’s research; and its potential applications. “We did not try to educate [visitors] on evolution itself-our job was to illustrate how evolution solves problems in simulation and how some of these behaviors we see in hyenas might come up in evolution,” says Miikkulainen. Understanding cooperation and communication in hyenas, the exhibit explains, will help other researchers build robots that cooperate with each other to perform complex tasks.

In addition to explaining the useful applications of studying evolution, the exhibit demonstrates the evolution of complex behavior, counteracting the misconception that evolution cannot give rise to complexity. The video shows the evolution of complex behavior, explains Miikkulainen. “It’s a very complex interaction, and you might say, hey, that’s so complex it won’t arise without a goal, there has to be a designer,” he says. “We can … show that it does arise as a response in a series of steps becoming gradually more complex.” Miikkulainen notes that his research using computer simulations is very much like video games, which he hopes will be appealing to younger museum visitors.

Miiklculainen notes that BEACON and its researchers are committed to outreach that increases the public understanding of evolution. “We’re not just some random scientists who get asked to do this,” he says.

“Taking research and presenting it as an exhibit that’s both understandable and enjoyable to your public audience is never an easy task,” comments Elizabeth Nesbitt, curator of paleontology at the Burke Museum of Natural History and Culture; located on the campus of another BEACON partner institution, the University of Washington. “It does take a particular kind of partnership between exhibit staff and research staff to make these types of exhibits work. It seems like the approach BEACON and the Michigan State University Museum are taking has an advantage in that the researchers are committed to putting in the work to make their research into an engaging exhibit.” 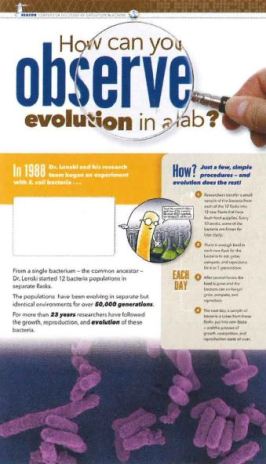 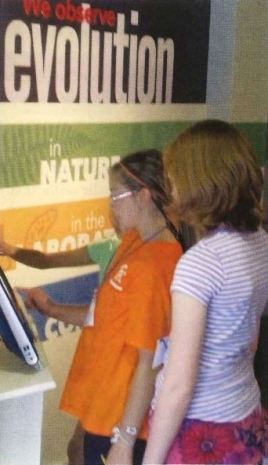 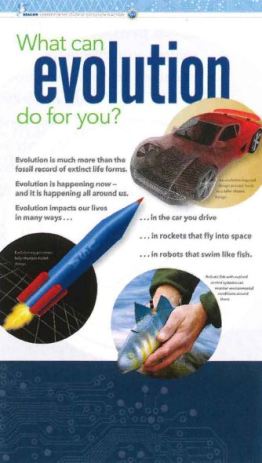 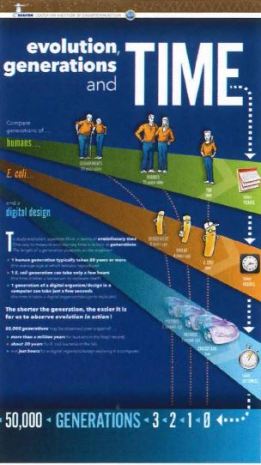 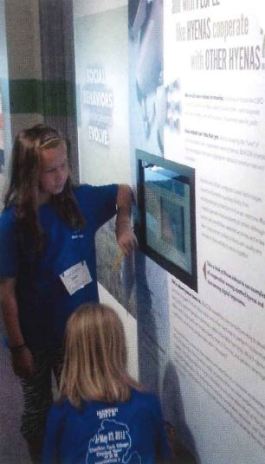 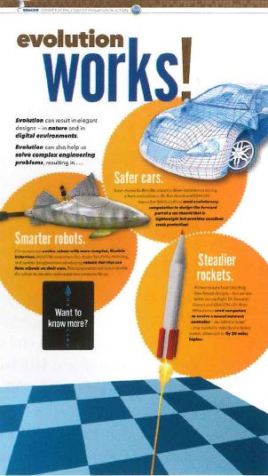 A key part of designing the exhibits, explains BEACON Education Director Louise Mead, was passing drafts “back and forth between the museum staff, the science educators and the scientists in an effort to make sure the science was as accurate as could be” and, at the same time, “understandable by a middle school student.” They didn’t always all agree, but the result, Mead says, is “very successful.”

Mead and Fick, both educators, remained sensitive to the need to preserve the accuracy of the science. “Rather than having it be a university level of discourse,” explains Fick, “we re-worded, re-worked the content,” increasing the appeal of the text and visuals in each iteration. They took care to make the content accessible to the general public, including the museum’s kindergarten through 12th-grade audiences while preserving the integrity of the science.

“We ran the different versions by the researchers to make sure that not only were we portraying the science correctly but that there was not any text that would lead a visitor to a misconception,” explains Fick, referring to the development of “50,000.” The same process will also aid the development of the “Mutation Station” that will illustrate random mutation-an easily misunderstood concept-in the gallery. This component is targeted for completion this fall.

The iterative development process also benefited from formative evaluation and focus groups. Exhibit developers asked high-school students to tour the exhibit, then interviewed them to find out what questions they still had about evolution and what big ideas they might have absorbed. The museum is currently working on audience research and evaluation of the exhibits. All told, the gallery represents months of work from designers, educators, researchers and others at both MSUM and BEACON.

Miikkulainen hopes that their hard work means other museums will have access to modern, accurate, high-quality exhibits on evolution: “One goal that we had is that we could share some of these museum exhibits and they could travel and go to other museums.”

The exhibits are being designed in modular units that can easily be copied by or transported to other museums. Pieces of the exhibition, such as the central hub or “50,000,” will be able to stand alone. In addition, the flexible design allows exhibits to be easily updated as research progresses, new projects begin or the museum finds better ways to help visitors engage with the content. “The gallery space itself will be ‘evolving’ in the sense that new elements will be created and switched in as ‘Hyenas Rule,’ for example, comes out. We want to feature additional cutting-edge evolution research going on here at MSU. We keep the exhibits relevant by regularly phasing in new material,” explains Fick.

It remains to be seen whether this approach to exhibiting evolution will have the desired effect. ”I’m not sure that anything we do is going to be able to influence peoples’ acceptance of evolution,” notes Mead, “but I certainly think that we can impact understanding of evolution.”