Every time I travel, I come back with new perspectives to bring to bear on my forecasting. Case in point—last week I was speaking at the Kansas Museums Association Meeting, and in the course of prepping for the talk and schmoozing with attendees, I saw signals that reinforce my existing worry about changing attitudes towards nonprofit status.
Remember—any plausible future has a toehold in the present. If you are concerned (or hopeful) about a potential future, look around to see whether there are hints that it may already be taking root in the present. Just as California leads the US into a future of majority-minority populations, water scarcity and the debate over same-sex marriage, Kansas may be giving us a glimpse of a future in which nonprofit status is not guaranteed, nor is it a guarantee of traditional tax exempt privileges.
Here are some of the challenges Kansas museums face:
These trends and events are troubling reaffirmations of CFM’s observations in TrendsWatch 2012 about the barrage of threats to nonprofits, from the IRS purging noncompliant nonprofits from its roles, to cities actively exploring ways to levy service fees, licensing costs and Payments in Lieu of Taxes on nonprofits. While these actions have largely been targeted at big organizations like universities, hospitals and on occasion major museums such as the Museum of Fine Art in Boston, this recent update points out that the trend is reaching deeper into the ranks: the mayor of Reading, PA recently asked “any and all nonprofit property owners to help the city out with cash.” Skip over related stories to continue reading article

I wonder if all these signals, taken together, foreshadow a closer examination of who we excuse from the tax rolls, in these tight financial times, and what constitutes a “social good.” Some people seem to feel that only social service agencies deserve the public support afforded by nonprofit status, while others feel that essentials like housing the homeless and feeding the hungry are a shared community (i.e. government) responsibility that shouldn’t be left to “charity.” Some feel that the arts should be a shared and accessible public good, while others agree with Congressional Republicans’ characterization of support for the arts as a “a wealth transfer from poorer to wealthier citizens.”)
I fear these trends could lead to the fragmentation of the way we treat nonprofits at the state and the federal level. If social service and cultural nonprofits get put into separate tax and policy buckets, I worry we will drift apart into separate, walled interests and no longer present a united front in the face of threats to the broader sector.
I also think it entirely within the Cone of Plausibilitythat states, and the federal government, may start raising the bar on what qualifies an organization for nonprofit status. There was a StoryCorps conversation on NPR earlier this month, between the husband and wife who founded the Rat Retreat in Idaho, the country’s only “rat sanctuary.” I’m not saying these guys would pay anything significant in taxes if they weren’t tax exempt. (To the contrary, I got the impression caring for 72 rats in their house is a strain on their finances.) The story was cute, and the people running the organization are clearly dedicated and sincere, and at some level I recognize this is only one step removed from the SPCA. But how many people listening to that story wondered why their taxes are supporting someone else’s pet rats*?  The tax status of larger organizations like Planned Parenthood or the Sierra Club is increasingly politicized as well. Whether it is a judgment based on how much good an organization does for society, or whether you agree that impact is “good” at all, once we as a country enter into these discussions, we begin to change the very nature of the “third sector” and the role we allow it to play.
Next week I’m training up to NYC for “At a Crossroads: What’s Next for American’s Nonprofit Sector, and event at which Johns Hopkins’ Lester Salamon, head of the Center for Civil Society Studies, will discuss three scenarios for the future. (I missed the DC version last week because I was in Kansas. Irony.) I hope that Crossroads helps me organize my thinking on this matter, and look forward to sharing what I hear on this blog. 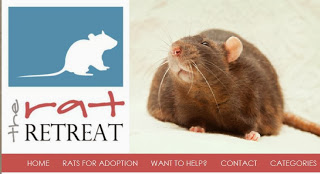 *At time of posting, the Rat Retreat’s website notes “we have had our 501(c)(3) status temporarily suspended until we get caught up on taxes,” so that isn’t, in fact, an issue right now.