This article originally appeared in the March/April 2016 issue of the Museum magazine.

The group met at the designated rendezvous: a pharaoh statue in the grand entry hall of the Metropolitan Museum of Art. Nine visitors, ranging from teens to a 55-year-old, signed up for a tour conducted by Museum Hack, a group that leads unauthorized gallery excursions with an emphasis on subversive fun. The guide was Michelle Yee, a 30-year-old art historian.

They joined hands in a huddle, like players before a kickoff. “On three, give me a MUSEUM!” Yee said.

For the next two hours, she led a brisk “tasting menu” of the Metropolitan Museum of Art’s exhaustive collection in Manhattan. The group took selfies with homely Colonial American portraits, viewed 4,000-year-old raisins in the Egyptian wing, debated the merits of a taxidermy deer coated in glass bubbles and sat on the floor like kindergartners while Yee told the racy backstory behind a Prussian walking stick.

Winning over reluctant visitors is Museum Hack’s raison d’être. The group particularly aims to sway Millennials roughly defined as 20- to 35-year-olds—who are more attuned to Google than galleries.

“A monotone lecture is a totally bankrupt idea for Millennials,” says Nick Gray, who founded Museum Hack in 2013. “We think today’s audiences have to be entertained before they can be educated. We’re not afraid to talk about how much the artwork costs. We’re not afraid to gossip.”

Over the past decade, turnout at museums has been steadily shrinking. Between 2002 and 2012, visits to art museums and galleries declined by 58 million, according to a study released in 2015 by the National Endowment for the Arts. And curators at museums, large and small, are uncomfortably aware of the preponderance of gray in their galleries. On average, only 13 percent of 18- to 24-year-olds visited a museum in 2012. Attendance diminished in every age group except the elderly. 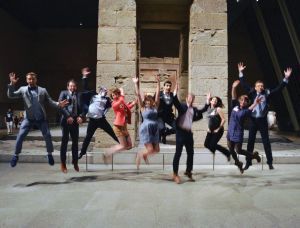 Baby Boomers supported museums through flush decades of expansion and swelling endowments, but they’re gradually aging their way out of the museum scene. Museums across the country are working to answer the same question: Who will take their place?

As a matter of long-term vitality, curators and administrators are courting a new generation that has little patience for static galleries and scholarly presentations.

“Millennials have grown up in a time of rapid change, giving them a set of priorities and expectations sharply different from previous generations,” according to a marketing report issued by Goldman Sachs. To earn their attention, and loyalty, museums must find a way to become more engaging, personalized and entertaining—or risk losing the Millennials to the instant gratifications of Netflix and Snapchat.

Is the lightened-up, fun-heavy museum the way to enlist younger visitors? It works for Museum Hack. The group offers tours of the Met and the American Museum of Natural History in New York (each $60) and the National Gallery of Art in Washington, DC ($50). It has no association with these institutions, but you can bet curators heed its lesson: If you free the gallery tour of pretension, the young and curious will show up. 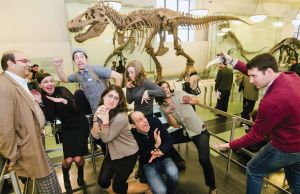 The line between art and entertainment is already blurring. MoMA PS1, the Museum of Modern Art outpost in Long
Island City, New York, has held weekly summer parties with DJs in its courtyard for 18 years, and bands have performed at the main branch of MoMA in Midtown Manhattan.

At MoMA and elsewhere, the bands are meant to help visitors overcome “threshold fear,” says Nina Simon, executive director of the Santa Cruz (CA) Museum of Art & History and author of the blog Museum 2.0.

But it’s unclear how many beer-drinking concertgoers even notice the Calder and Picasso standing beside them in the sculpture court. Rather than a museum event with a band, these may be concerts that just happen to be in a museum. “Hiring a DJ and serving beer—they may be taking the easy way out instead of truly adapting,” Simon says.

On the other hand, museums have learned that Millennials do respond to small social gatherings. After-hours functions have become a museum fixture throughout the country. (Never underestimate the drawing power of a  plastic cup of merlot.) The Phillips Collection in Washington, DC, was among the first to adopt this strategy. Its Phillips After 5, which convenes on the first Thursday evening of every month, blends drinks with jazz performances, staged readings, food trucks and films. In the Phillips’ parlor-sized rooms, it feels like a house party.

“It’s our most dynamic vehicle for communicating with a younger crowd,” says Dorothy M. Kosinski, director of the Phillips Collection.

Millennials are the first generation of digital natives, and they expect their museum visits to seamlessly conform to their digital lifestyle. By way of response, many museums—a list that includes the Guggenheim, the Met and the Boston Athenæum—have either installed or tested beacons, a Bluetooth technology that tracks visitors’ locations within a few feet as they wander the galleries.

The beacon system knows which painting you’re admiring, and it can push pertinent information—video, text or audio—to a smartphone (provided you download a museum app). Wondering what’s up with those creepy Cindy Sherman photographs? With beacons, read comments left by previous visitors, just as you would on Yelp or TripAdvisor. Unsure why a taxidermy sheep by Damien Hirst is considered high art? Use the museum app to post a photo on Facebook and let your friends weigh in.

Among other things, the social media enabled by beacons democratizes the galleries. Instead of passively receiving a single authoritative view passed down by scholars, visitors are empowered to express their own opinion.

“Nobody has control over knowledge,” says Elizabeth Barker, director of the Boston Athenæum. “It’s no longer enough to give canned recitations of facts. We can’t tell people they have to walk clockwise though the galleries and look at each piece of art for 20 minutes.”

A forward-looking trend report, Trends Watch 2015, published by the American Alliance of Museums put it this way: “In a world pivoting towards open, can museums afford to be left behind?”

Museums need Millennials for attendance—and for donations. At more than 75 million, they are the most populous current US generation, and they are about to enter their financial prime.

But they are more cautious with their charitable giving than their parents, which presents a problem for museums.

“It’s one of the biggest challenges we face,” says Barker. “We’ve always assumed that the well-educated will hit a significant birthday, never specified, and suddenly become avid devotees of cultural institutions and begin to give. We’re beginning to see that isn’t something we can take for granted.”

For one thing, Millennials move between cities more frequently than their parents did. As a result, they rarely feel the same sense of civic obligation. When they do give to cultural institutions, the younger set gravitates to recipients with clearly defined metrics for success, and they expect some role in reaching those goals. The new hands-on approach is what marketers call “outcome-oriented” philanthropy.

Museums are finding ways to adapt to the new reality of charitable giving. The Guggenheim, for example, has formed an acquisitions committee with members ages 21 to 40. In return for a $1,000 contribution, they convene twice a year to vote on new additions to the museum’s contemporary collection. They’re also invited to private studio visits and an annual party.

“I hear it from the young members all the time,” says Karaugh Brown, senior manager of membership and patrons at the Guggenheim. “They’re much more engaged. They’ll call or e-mail or text over and over to say that they don’t want to just write a check. They want to be part of the process.”

If museums are to retain their prominence in our cultural lives, they must find new ways of involving Millennials, both as donors and patrons. But museums have something working in their favor that Snapchat can’t compete with. Even in a world bombarded with information, there is nothing like the poignant play of shadow on a torso, the artifact that reminds us where we came from, the human gesture wrought in marble.

Every great museum is a reflection of us, of who we are. “Cultural institutions still have a powerful appeal,” says Barker. “They can tell us what it means to be human.”

Michael Cannell is a formerNew York Times editor and author. Reprinted with permission from Arrive magazine.