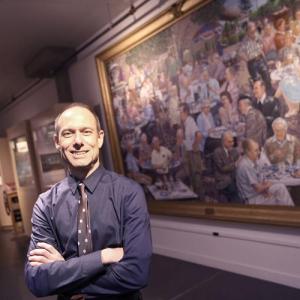 Snoopy might not seem like the most obvious choice for a mascot to represent museums, but suspend your disbelief for just a moment.

He’s been a World War I flying ace, a painter, a shortstop, an author, a dancer, an attorney, an astronaut, and even a grocery clerk. Is there anything this dog can’t do? We at the California Association of Museums (CAM) would say that Snoopy’s love of lifelong learning makes him the perfect symbol for our message that “Museums are for Everyone.”

Also, early on in our process we realized a forceful reality—that people were far more likely to buy a specialty license plate because it featured a favorite and highly-recognizable character than simply to “support the cause” (no matter how valiant or noble that cause was—see the failure of other high-profile specialty plate efforts such as the Golden Gate Bridge, Sierra Nevada, Salton Sea, and State Parks’ Redwoods plates.) They call them “vanity plates” for a reason.

Snoopy’s journey from embryonic idea to DMV-approved California license plate was about as fraught as “Race for Your Life Charlie Brown” (a deep cut for the true Peanuts fan—you know who you are).

Back in the early 2000s, the rules to create a specialty license plate were fairly permissive, and we imagined the process would be easy. Who doesn’t love Snoopy? However, as a flood of new plate applications poured in over the decade, some for controversial and conflicting causes, the State Legislature changed the rules to make the threshold for approval much higher. Plates now needed to submit 7,500 pre-applications (including a financial deposit of at least $50) to the State of California within one year (although a one-year extension could be granted) or else the application would be automatically denied.

In addition, specialty license plates could no longer feature full-plate designs (making them generally less desirable to the public) and could not directly benefit a non-profit organization. Funds from specialty plate sales would now flow to a California state agency to support cause-related programs.

As a result of these regulatory changes, no new specialty license plates were created in California between 2003 and 2010.

Despite these major setbacks, past and present CAM leadership recognized the Snoopy license plate was still an amazing opportunity to create a permanent funding stream for museums that neither relied on new taxes nor burdened the state’s general fund. We got down to planning and building support from the ground up.

We built an email list of eleven thousand museum friends and Snoopy fans. We secured an early donation from a local family foundation friendly to museums to help cover development and planning costs.

We developed a relationship with San Francisco ad agency Duncan Channon, who provided pro bono marketing and messaging muscle. They were integral in helping us craft compelling messages to inspire pre-purchases, and in helping us identify the most cost-effective marketing channels for our tremendously limited advertising dollars.

We also explored potential partnerships with a number of California state agencies, including State Parks and the State Library, finally cementing a relationship with the California Cultural and Historical Endowment (CCHE).

Through our partnership with CCHE, and through CAM’s long history of statewide advocacy work, we were able to secure the attention and support of Assembly Member Toni Atkins, who represented the 78th District that includes most of San Diego. Perhaps it was Speaker Atkins’ great experiences at the many museums in her district, or her own love of Snoopy, but she enthusiastically endorsed our effort. She generously sponsored legislation (AB482), and we officially launched the application program in January 2014.

In just the first month of the program, we held a press conference attended by all the major networks and collected over three thousand pre-applications. It seemed the program was going to be a slam-dunk and set records for how fast we could achieve 7,500 pre-applications!

Then, the hard work began.

It seemed we had gathered all of the low-hanging fruit and early adopters, and now we needed to find a way to sustain momentum. We needed to work the edges of Snoopy fans who wanted the plates to celebrate their fandom, and museum fans who wanted the plate to support the cause. People needed assurance that they would receive a refund if we didn’t make our goal, and that the state wouldn’t abscond with their deposit, or redirect it to some other program.

CAM’s Snoopy License Plate Committee pulled out all the stops. We pitched news stories to traditional and new media outlets all around the state. We explored promotional partnerships with regional marketing organizations. We wrote endless copy for websites, emails, and social media. We tabled at local and state fairs. We sent flyers to museums all over the state. Letters to the Editor were written by the dozens.

And then there were the small “random acts of kindness,” er, promotion. I made a miniature billboard advertising the Snoopy plate for the HO-scale model railroad at my museum, and wore a self-made Charlie Brown shirt, complete with black zigzag stripe, to crash other Peanuts-themed events, including the annual BeagleFest in Santa Rosa, CA and a couple of San Francisco Giants games. We staffed a Lucy-style “advice booth” at our annual CAM conference (where all the advice included the suggestion to purchase a plate).

After one year, we had collected five thousand pre-applications. We were fortunate to get a one-year extension from the DMV to try to reach our 7,500 goal.

CAM board members leveraged relationships to write and create a fifteen-second public service announcement (the voice-over being provided by a pre-teen museum supporter). I contacted major movie theater chains and secured pro bono ad space for the PSA to run on-screen just before the new Peanuts movie for a month.

In December 2015, with just one month left to go, we were still six hundred applications shy of our goal. Our “Hail Mary” moment came in the form of an anonymous angel who underwrote the cost of the remaining six hundred plates, so we could give them away. It took just six hours on December 3, 2015 for us to give away the last plates needed to reach our goal.

Once we reached our goal, and the Snoopy license plate was a sure thing, an additional fifteen hundred paid applications came out of the woodwork. (Where were you people hiding?!?)

We ultimately presented the DMV with over nine thousand pre-applications. (In true bureaucratic fashion, the DMV required us to present the applications on paper, rather than in the digital form we had collected them in. Thanks to our partners at the CCHE for the days of printing it took to accomplish that task!)

At CAM’s 2016 annual conference, CAM President Shawn Lum and I, portraying Lucy and Charlie Brown, stood before the entire assembled museum field to announce the results. We re-enacted the famous Peanuts football incident, complete with costumes, props, and exact dialogue. “Oh Charlie Brooowwwnnn. I’ll hold the ball, and you come running and kick it…” This was the first time in known history that Charlie Brown got to kick the football.

There are now over ten thousand Snoopy license plates on California roads, and sales of the plate continue (through the official California DMV website) at a pace faster than most specialty plates. Our partners at the CCHE are putting the final touches on a new museum grant program to provide programmatic, project-based, and small capital support to institutions large and small across California through a peer-reviewed grant process. By all measures, the project has been an overwhelming success.

Some say that it takes years to become an overnight sensation; the Snoopy license plate project would certainly seem to fit that description. But we in the museum field take the long view—preservation and conservation are built into our DNA. Looking back now at this decades-long effort, I can see the moments where we called our community to collective action, how we were stronger together than operating separately, how our team kept narrating hope for our museum community, and why it was so important that a courageous few individuals continually rallied themselves and our field to do something extraordinary.

Special thanks to Peanuts Worldwide and the California Cultural and Historical Endowment, all the museum professionals who served on our License Plate Committee, all those who donated time and expertise to our effort, and to the more than ten thousand plate purchasers.

If you live in California, you too can own your own Snoopy license plate and support our field. To learn more, visit snoopyplate.com or order yours today directly through the California DMV!

Phil Kohlmetz is a board member at the Vallejo Naval and Historic Museum and formerly the executive director of the Napa Valley Museum. He continues to work on behalf of non-profit, public-benefit cultural organizations. Since moving into the museum field in 2003, he helped launch the Snoopy License Plate, raised over $3 million for capital projects focused on artifact preservation and public interpretation, and completed an Organizational Assessment with AAM’s Museum Assessment Program. He is the chair of the CAM License Plate Committee, is a CAM past president, and previously chaired CAM’s Legislative Committee.