I’m often asked which topics featured in CFM’s TrendsWatch report proved to be of enduring importance, and which fizzle. I’m happy to say that so far, all the trends we’ve identified have continued to be significant for our field. Case in point, crowdsourcing—a topic CFM examined in our very first forecasting report, TrendsWatch 2012. Today on the Blog, Jaan Elias, Director of Case Research at the Yale School of Management, shares a particularly interesting example of harnessing the wisdom of a very particular crowd.
–Elizabeth Merritt, VP Strategic Foresight and Founding Director, Center for the Future of Museums

Museums have employed crowdsourcing, the practice of enlisting the help of the public to identify objects, contextualize artifacts, and discover complementary material. However, most museum crowdsourcing to date has involved the creation of exhibits. Could museums turn to crowdsourcing to help formulate organizational strategy? Inadvertently, we were able to partner with Yale’s Peabody Museum of Natural History to hold an event that showed how this might be accomplished.

I say “inadvertently” because we hadn’t intended to create a crowdsourcing vehicle. Our job at the Yale School of Management (SOM) Case Research and Development Team is to document difficult management situations to serve as classroom exercises for students. When our neighbors across the street, the Peabody Museum, approached us about describing their strategic dilemmas around a planned renovation that would close the museum for at least two years, we readily agreed. The case study fit with our curriculum—SOM offers a number of courses in social enterprise management, and SOM alums play an important role in the museum world, e.g., Gail Harrity (president and COO of the Philadelphia Museum of Art ), Daniel Weiss (president and CEO of the Metropolitan Museum of Art), and Thomas Krens (former director and senior advisor for international affairs at the Solomon R. Guggenheim Foundation).

We decided to debut the case not in a classroom, but as the subject of the Greater Yale Case Competition, an event designed to bring together teams of Yale graduate and undergraduate students to test their analytic and creative abilities. Held on February 10, 2018, the contest gave the student teams about twenty-four hours to formulate a strategy for the Peabody, based on our case study. Then the teams came together at the management school to present their plans to judging panels made up of Peabody personnel and university faculty.

Ninety students on some twenty teams presented a wide variety of ideas. Elements that appeared in a number of their proposals resonated with museum staff:

The winning proposal outlined a multi-pronged approach to how the museum could connect with children and families, community adults, and the Yale Community. This team’s strategy included: 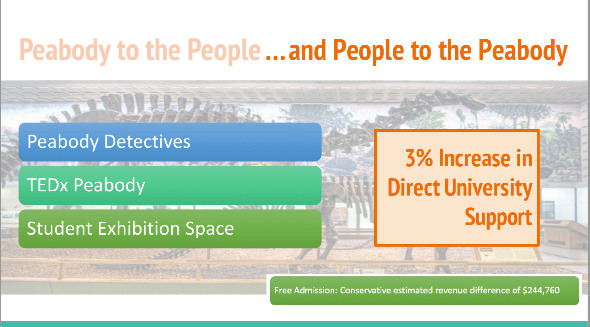 While it remains to be seen which if any of these proposals will be adopted, student teams aided museum planning by fitting their ideas into the Peabody’s strategic context, complete with financial projections, marketing plans, and mission-based justifications. Overall, the Peabody staff I talked to were inspired by the student work.

It is understandable that museum managers may feel somewhat uncertain about having a “crowd” analyze operations and suggest strategy. However, as this Harvard Business Review article notes, “crowds are moving into the mainstream,” and they can be an important resource for formulating innovative solutions, even for deep strategic questions. McKinsey has touted “participatory modes of strategy development.” The consulting firm cites two major benefits to crowdsourcing. First, it improves the quality of strategy by “pulling in diverse and detailed frontline perspectives that are typically overlooked.” Secondly, crowdsourced strategy can build enthusiasm among stakeholders for a particular plan or view of the future.

Building on our experience, I can offer three suggestions to anyone looking to use crowdsourcing in strategy formulation:

*Readers of this blog who would like to read our case study on the Yale Peabody Museum should visit this link and enter “MUSEUM” in the discount code box. Case access will be free until June 15, 2019. An excerpt from the case is available online for free, as well.