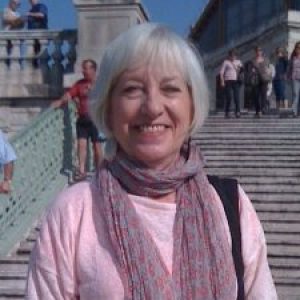 Have you ever thought about how many decades are contained in these references we make to old age? There are almost fifty years between becoming eligible for an AARP card and turning one hundred. Yet all the years subsumed into this normal human process come under the heading of “aging.” In truth we are all aging all the time, and the period of life that is most popularly referred to as such is really a series of developments and conditions that can vary tremendously over its span. Lumping all of these developments under a single term can lead to stereotyping and to a misunderstanding of the aging process.

For this reason, I’d like to reflect on my own process of growing older, combining it with professional experiences I’ve had in working on exhibitions on aging. In the discussion below, I look at my own experience in four stages. I link that experience with what I thought and wrote about aging when I was a much younger exhibit developer. And I reflect on how issues of diversity and inclusion affect aging and our understanding of it.

When I was in my fifties I worked as Interpretive Planner on Secrets of Aging, an interactive exhibition on then-current aging research (this was the 1990s). The Museum of Science in Boston was heading up the development of the show for a science museum collaborative; all of the members would host the show in turn. At the time, I was working at the American Psychological Association on the Traveling Psychology Exhibition and had access to many psychologists on the leading edge of gerontological research. APA lent me part-time to the Boston museum to advise on their exhibition. We had an advisory group of seniors in their seventies and eighties who were very helpful, but most of us working on the exhibition, as well as the psychological researchers, were in our fifties or younger.

“Secrets of Aging” aimed to debunk the idea that aging is a defect or disease and to present it as a normal progression of life. It presented current research on how diet, exercise, and other factors could make aging a healthier process. The lessons that I took personally from working on the project have sustained me over the last twenty years: exercise, healthy eating, valuing social relationships, and continuing intellectual and professional activity. At the same time, in retrospect, I was a bit naïve about the lived experience of growing older. In our fifties we see some gray hairs, we notice some wrinkles and flab that won’t go away despite exercise, and some of us complete menopause. But these experiences are only the beginning in the aging process.

I retired from full-time work at age sixty-five, but continued to be active as editor of Exhibitionist (now titled Exhibition), the journal of the National Association for Museum Exhibition (NAME). I traveled several times to teach museum studies in India. I was healthy with lots of energy. But in my sixties I lost my parents, and three women in my nine-member book club died of cancer within a three- or four-year period. I began to experience another dimension of the aging process, which is outliving those you love. This is a sign of what’s to come: the longer you live, the more loss and grief you experience. Even if you are lucky enough to be healthy and active, losing family and friends brings thoughts of one’s own mortality. In Phase Two I learned that that even healthy and creative aging is suffused with difficult and sometimes overwhelming emotions.

Now, in my seventies, I am finally coming to terms with the fact that by any definition (even if fifty is the new forty and cosmetic ads proclaim, “You’d never guess she’s in her sixties”) a human being in their seventies is in the full flower of aging. I am still healthy and active—still exercising, traveling, and writing—but I do see a change in my energy level. I simply am not as productive; I accomplish fewer things in a day. I am less able to multi-task. I wear hearing aids. My friends are getting knees and hips replaced. Like the late Nora Ephron, I “worry about my neck.” I continue to lose family, former classmates, dear friends. As a volunteer driver for an organization that works to keep older people in their homes, I see those I drive pass from strength to frailty, both physically and cognitively. I have lots of friends and family, and feel so lucky to have the life I live. Still the sense of loss is becoming stronger. It takes a bit more courage and persistence to face each day.

Phase Four: Eighties and beyond

I have a few years before my eighties, but friends who have traveled into this new territory report a change in energy, attention, and overall health. I drive people in their eighties and nineties who are sharp, active, and interested. Three nonagenarians (all women) live in my apartment building. They use walkers, but are nonetheless quite active and up on everything going on in the building. From my current vantage point, “old” old age is a mixed bag—still plenty of time to be active and engaged, yet diminishment cannot be denied.

What does all this have to do with AAM’s Museums & Creative Aging initiative?

Everything that I have written above comes from the perspective of a white, middle-class woman with an advanced degree. (And my neighbors in their nineties fit this demographic too.) I learned from the research I was exposed to in Secrets of Aging that all of these factors (my race, gender, income, and education level) favor the best possible experience of aging.

Thus, the conversation on creative aging cannot be separate from the one on diversity, equity, accessibility, and inclusion. This initiative and its efforts to encourage museums to combat ageism and become more age-friendly should above all be intersectional. (Intersectionality, a term coined by critical race theorist Kimberlé Crenshaw, posits that human experience cannot be analyzed in terms of separate identity categories, and so factors like race, income, and education must be considered as they intersect in shaping people’s lives.) The concept of creative aging must be filtered through the different ways that people experience aging as a result of their race, gender, income, education, culture, and ethnicity.

Research confirms that these societal conditions profoundly shape people’s lives. The uneven access to good healthcare in this country has a tremendous impact on healthy aging in communities of color. And, according to recent research, level of education correlates with longevity even more than income. Any creative aging work should consider these important influences in how, why, and with whom it develops programs.

In addition to being intersectional in its approach to creative aging, I think it’s important for this project to be empathetic, to validate and address the emotional dimensions of the lived experience of older people. This dimension is often overlooked, including in the projects I’ve worked on. Looking back, I think that “Secrets of Aging” focused mainly on physical and cognitive aging because it fit the content of science museums, and there was so much exciting and helpful scientific information on those fronts. Also, those of us developing the exhibition were in Phase One of aging, or even younger: the emotional toll was not yet evident to us. From my perspective, creative aging must rest on courage and resilience in the face of the inevitable debilitation and loss that comes to even the heartiest among us. People like I.M. Pei, Frank Lloyd Wright, or Toni Morrison who continued creating well into old age did so by working though the losses and challenges of their lives.

As for myself: in the literal sense I am “aging creatively” through my research, reading, and writing. But in truth, the most creative thing I do every day is to try, with joy, curiosity, and appreciation, to participate in life itself.

Gretchen Jennings has worked in museums for over thirty years. She was a project director on the traveling exhibitions Psychology and Invention at Play, both of which received AAM awards of excellence. She has been editor in chief of The Journal of Museum Education and Exhibition. Currently, she offers workshops in museum studies programs, including the National Council of Science Museums in India; edits museum publications; and collaborates on projects contributing to social justice in the museum field. She blogs at Museum Commons, co-founded the Empathetic Museum project, and is a member of the Museums & Race and MASS Action initiatives. She can be contacted at gretchenjennings934(at)gmail.com and @gretchjenn on Twitter.