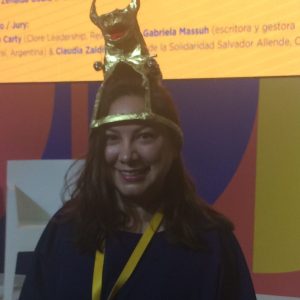 This past November, I attended Reimagining the Museum: Conference of the Americas, held in Oaxaca, Mexico. Part of my excitement about attending the conference was that Latin America, and especially Oaxaca, is known for its community museums, a model that has had more limited traction in the United States. Simply put, a community museum focuses on the local, both in terms of the scope of its work and in terms of its primary audience. The Museo del Westside, where I serve as founding director, was conceptualized as community participatory museum, a space where our exhibits and programs are informed and shaped by community ideas and interests and a space where the community tells its own stories.

In September, as ICOM contemplated and then postponed a revision to its definition of museum to be more community-conscious, the 1972 Declaration of the Round Table of Santiago de Chile, which declared that museums’ primary duty is to their community and introduced the Latin New Museology, felt more vital, more relevant, and as we say in San Antonio, “más chingón” than the typical US model, building my excitement to be surrounded by Latin American museum practitioners.

Unexpectedly, my application for a scholarship led to an invitation to participate in a session called “The Crowning” in exchange for complimentary registration, which was an opportunity I could not miss as director of an emerging community museum with no conference budget. In the session, four museum professionals each presented an idea for a new initiative in front of a panel of judges made up of culture industry thought leaders—a kind of Shark Tank: Museum Edition.

The initiative I presented addresses our community’s uncertain future. The Museo del Westside is located in the Westside of San Antonio, one of the city’s poorest but most historically and culturally rich areas. Ever since the Mexican Revolution, when thousands of refugees moved in, the Westside has been known as a national capital of Mexican American culture, with vernacular architecture, religious sites, plentiful murals, and a reputation for producing numerous influential Mexican Americans—ranging from visual and performing artists to leaders in education, politics, and business.

Our museum’s history began when Esperanza Peace & Justice Center, a multi-disciplinary and multi-issue arts and social justice organization, acquired a vacant building formerly home to two small businesses in the Westside’s Rinconcito de Esperanza (Little Corner of Hope) in 2007, then learned through community meetings about the desire for a community history museum. Ten years later, I joined the Esperanza to make that vision a reality.

But soon after our founding, we had to confront the reality that the neighborhood we seek to serve is under threat. The small-scale, densely spaced structures that once dominated the Rinconcito de Esperanza are an increasingly rare sight, with demolitions and land speculation creating large vacant lots where dozens of small houses once sat. Our property is located across the street from one such empty expanse, where the city has approved the building of a four-story “loft” apartment building, which will dwarf the humble homes surrounding it. We recognize this planned behemoth as a sign of what is to come.

One set of structures at risk for demolition is the Alazan-Apache Courts—also known as Los Courts—the first public housing in San Antonio. Located two blocks north of the Museo del Westside, Los Courts opened in the early 1940s after the Westside experienced a horrific housing shortage during the Great Depression. With a design influenced by the worker housing in Bal Buena, Mexico City, they replaced hundreds of makeshift one- or two-room wooden structures and provided critical housing for nearly five thousand Mexican Americans in 1,180 units. Today, despite the fact that more than thirty thousand people are on a waiting list for public housing in San Antonio, this housing has been reduced unit by unit to eighteen hundred residents in 685 units. The housing authority recently confirmed long-rumored plans to demolish the Alazan Courts to build mixed-income housing.

Residents of Los Courts have been integral to the culture of the Westside for eighty years—the internationally acclaimed singers Eva Garza, Gloria Rios, and Lydia Mendoza all lived in them at one time. The current residents are key members of the community we serve, and in fact the president of the Alazan-Apache Courts resident association serves on our Community Advisory Committee. These residents have no way of knowing where they will end up or how they will maintain their social networks once their homes are demolished.

This is the challenge I presented at The Crowning. I proposed to launch a community storytelling initiative with the residents of Los Courts, starting with oral history, photography, and community mapping workshops. This way, the residents could share in their own words and through their own eyes how they feel and think about life at Los Courts and the changes that are coming, as well as what their hopes are for the future.

Through this initiative, we would document the lives of Los Courts residents and then work with them to create a public presentation of their stories in a medium of their choosing, perhaps through an exhibition and book, a series of radio broadcasts (the Museo del Westside’s parent organization has a low-power radio station), or even a theater production based on their stories. We would like to create something with a permanent component that will last another eighty-plus years so that people of the future can learn what the Los Courts residents experienced and what was done to them. This would be an opportunity to empower the community through personal storytelling, while also embracing our role as community advocates and our goal to work with our community to build a more equitable future.

The residents of Los Courts have already let it be known that they are not sitting idly by while the housing authority makes decisions about their futures. As evictions have risen threefold in the wake of emerging demolition plans, often for reasons like maintenance issues or unpaid fees, many residents feel they have no other option than to go public. We hope to channel this willingness to go public into group storytelling. We have several potential models for this, like the monthly group oral history gatherings Esperanza has been hosting on the Westside for the last decade, our previous collaboration with the musician Lourdes Perez to transform Westside stories into a series of songs and a book, and the women’s clay cooperative located in the Rinconcito, where personal stories are transformed into clay art.

I concluded my presentation by saying that we believe in the power of storytelling to transform lives, and we hope to launch this storytelling program with the residents of Los Courts to confront their impending removal due to gentrification and give them a space to share their lives in their own words and through their own eyes.

While I thought this was a worthy project, I was not confident about my chances of winning the competition. The Reimagining the Museum conference is largely attended by Latin American museum workers and I thought a US-based museum worker, even a Mexican American museum worker trying to expand the boundaries of what US museums do, wouldn’t have much chance in such an innovative environment. So, I was absolutely shocked to win! For my prize, Michael Andrés Forero, co-founder of Museo Q and the previous winner of “The Crowning,” presented me with a handmade crown—a miniature version of the papier-mâché bull used in a traditional Oaxacan calenda (procession). I was also grateful for feedback from audience members who shared their support and ideas for the initiative.

I want to acknowledge the amazing ideas presented by my session colleagues. Adriana Correa Velásquez, executive president of the Corporación Maloka de Ciencia, Tecnología e Innovación in Bogota, Colombia, made an impassioned pitch for a new exhibit on the science of migration to confront the realities of the Venezuelan refugee crisis in Colombia—a crisis that has literally arrived on her museum’s doorsteps. Luis Marcelo Mendes, a journalist and museum consultant based in Brazil, offered a light-hearted concept for opening museums to pets. Isabel Collazos, chief curator of Museo Larco in Lima, Peru, proposed an overhaul of how the museum presents ancient Peru to encourage personal connections to the past and highlight the current relevancy of Peru’s history in contemporary daily life. Our esteemed judges were Hilary Carty, director of the Clore Leadership Programme; Gabriela Massuh, author and cultural critic; and Claudia Zaldívar, director of the Museo de la Solidaridad Salvador Allende.

As I anticipated, I was deeply inspired by the presentations I heard from museum colleagues I doubt I would have met in the US. I especially recommend watching Néstor García Canclini’s talk. There were also a few speakers that would be well-known to US museum workers: Fred Wilson, Elaine Heumann Gurian, Carlos Tortolero, and of course AAM’s president and CEO Laura Lott.

The next Reimagining the Museum conference will be held in 2021. I look forward to attending, and hope to have completed the first phase of the Tales from Los Courts initiative by then.

Sarah Zenaida Gould, PhD is director of the Museo del Westside, a project of the Esperanza Peace & Justice Center in San Antonio, TX. A champion of working class history, Dr. Gould is committed to expanding our common understandings of museums and heritage conservation to always be just, equitable, and inclusive. She serves on the boards of Latinos in Heritage Conservation, El Camino Real de los Tejas National Historic Trail Association, Friends of the Texas Historical Commission, and the National Institute of Mexican American History of Civil Rights. She received a BA in American Studies from Smith College and an MA and PhD in American Culture from the University of Michigan. You can follow the Museo del Westside on Facebook and Instagram at @museodelwestside.