Participating in Facing Change has helped the Naper Settlement board and staff transform the institution.

This article originally appeared in the September/October 2022 issue of Museum magazine, a benefit of AAM membership.

When AAM asked my institution, Naper Settlement, to participate in a prestigious and cutting-edge project related to diversity, equity, accessibility, and inclusion (DEAI), I confess that I had reservations. I even considered bringing it to our board with a recommendation not to participate.

I should have been elated. After all, this was the first national initiative of its kind, and it was funded by nationally and internationally recognized institutions like the Mellon, Walton, and Ford foundations. Why would I consider declining to participate? I have a list of very good reasons, but three years later, it really comes down to one—fear.

No doubt this project was appropriately named: Facing Change. Facing change is scary. When it involves 18 of your bosses and the body that governs and sets the pace for the institution, it is downright frightening. To add to our complexity, Naper Settlement is owned by the City of Naperville but is managed and operated by the Naperville Heritage Society (NHS). This means that there is yet another layer of oversight through a city commission board called the Naper Settlement Museum Board (NSMB), chaired by the city’s mayor.

NHS and the City of Naperville, via NSMB, have constructively worked together for over 50 years through a public-private partnership. While the city is respectful of the museum’s independence, it too has a commitment to the residents and taxpayers who help support the museum. As such, we present, discuss, and share the result of all projects and grants with NSMB. In other words, this was yet another board that I would have to face if we failed.

If you’ve ever been involved in transformative work, you know it is the epitome of controlled chaos. Everything must run like normal while change abounds. Could we really wrap our arms around such introspective work? What if we didn’t like what we saw? What if this worked to divide our board? What if we failed? 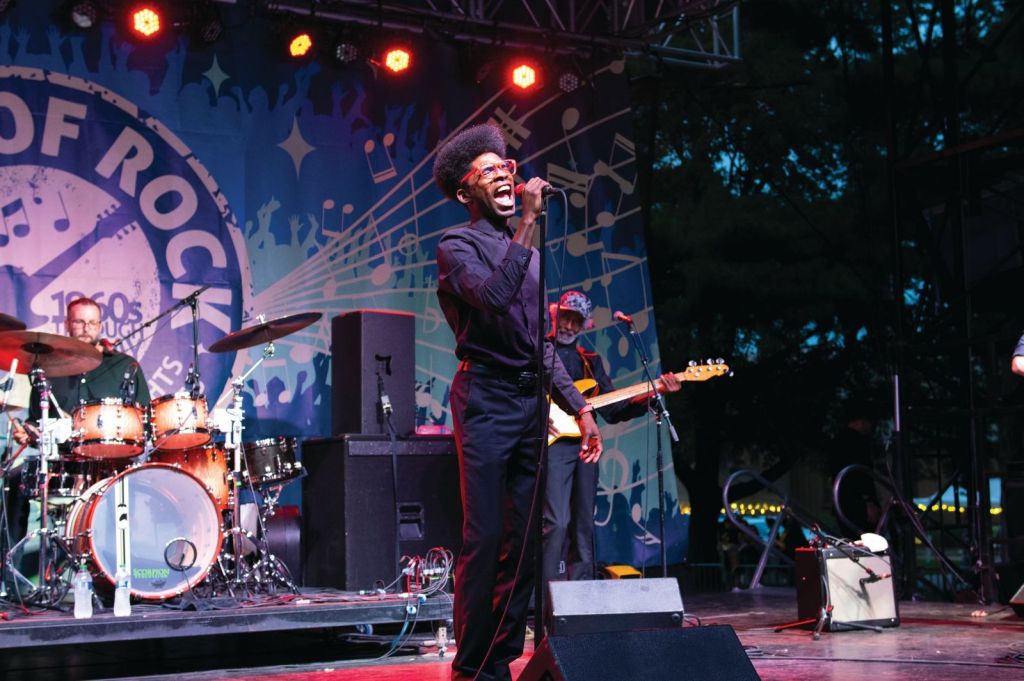 Making the Choice for Change

In 2019 we were already immersed in self-evaluation, two capital campaigns, and the realization that our city had changed and we had not kept pace. We were telling a one-facet and one-sided story that younger generations and a large part of the residents in our community did not relate to. I had been hired a few years earlier to bring about the transformation of the museum from a strictly 19th-century settlement story to becoming a campus of lifelong learning, discovery and fun for all people. We were now going to tell Naperville’s whole history, from pre-settlement to current day. 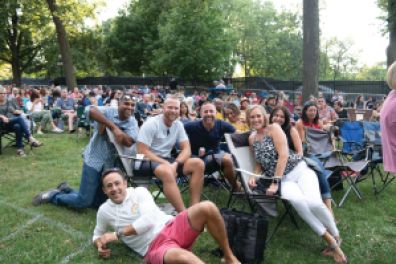 Until the latter part of the 20th century, we were a predominately white community, but even once we neared 32 percent people of color, we had little to nothing in our collection to reflect that part of our population. With the expanded mission, we had an entire century for which we needed to collect, document, and develop programming, not to mention conducting rapid collection initiatives to ensure we captured historic times—from COVID to political protests.

While we had a lot going on, in the end I felt that forgoing the opportunity to participate in Facing Change would be a disservice to the institution. I was relieved when our board chair immediately welcomed the idea. Boards govern and set the tone for the culture in and outside of the institution, and this was leadership at its best. Board members were also facing change and acting on their commitment to represent the community they serve. Even though we would embark on this journey hand in hand with AAM and notable experts in this field, I confess that I began with great excitement and perhaps even greater trepidation.

The NHS board appointed an ad-hoc committee comprised of diverse long-standing and new board members. One of the most salient and reassuring moments came before our first meeting. All participants were asked to read the book Filter Shift by Sara Taylor. The book was a quick read (literally—five chapters that could be read in less than one hour), but it was a game changer. The book describes the notion of unconscious filters: how we create them, how we perceive the world through them, and how they impact us.

These unperceived dynamics were made even clearer at the first all-day retreat of museums and boards participating in Facing Change in our region, led by Taylor and consultants from her firm deepSEE Consulting and the AAM team. In the first session, Taylor brought up prejudice, explaining that we all pre-judge other people’s actions or beliefs and that our brains are hardwired to do that. There were many other what!?, aha!, and urgh! moments as we met as a large group and in individual museum groups that day.

The project was able to maneuver through 2020, which included the beginning of COVID, the extreme polarization in the country, mass confrontation, and even rioting in Naperville. The Facing Change senior fellows and leadership moved sessions online, continuing their work as facilitators and accountability partners.

The selection of the experts and material responded to the changing needs of the museums, and the addition of the consultant Beth Zemsky deepened our learning and reflection. She and the project helped us understand the challenges of the multigenerational, multicultural workplace. The consultants provided us with tools to measure both individual and organizational cultural competence.

For example, they utilized the Intercultural Development Inventory (IDI) assessment. Among other things, it measures the capacity of the person taking the assessment to recognize complex cultural differences. The individual reports were aggregated to create a group profile for each participating museum board. That information was then used to tailor goals and strategies for each board.

I am also grateful for the CEO charrettes. Each meeting was organized by type of museum and later by museum goals and plans (e.g., board recruitment, community engagement). In these meetings, we could share our accomplishments, complexities, and even frustrations as we faced this transformative work. Some CEOs were dealing with resistance from an individual board member. Some were confronting the mismatch in the perceived and actual IDI assessments, and brainstormed ideas to bridge those gaps. Overall, these meetings demonstrated that we weren’t alone and there was ardent support for staying the course.

Building on Our DEAI Work

NHS, the administrator of Naper Settlement, made a commitment over a decade ago to expand its story, to allow the history-makers to speak in first voice about their own experiences, and to ensure that the museum was a welcoming place where everyone could see themselves. Since then, we have had our first-ever Asian exhibitions—“Me = We” and “Come As You Are,” which focused on our Chinese and Indian populations, and “Unvarnished,” which examined our city and nation’s history of segregation.

Additionally, for the last five years, Naper Settlement has been leading a national leadership grant from the Institute of Museum and Library Services (IMLS) to examine de jure and de facto segregation in the north and western United States. The project focuses on the history of six communities from Connecticut to California and includes the thorny history of Naperville, once a known and revered sundown town—an all-white town that excluded Blacks and other minorities through the use of discriminatory laws, harassment, and threats or use of violence.

The value of Facing Change is not that it fixes the problem, but that it helps all of us identify it and embark on a course to improve. Our board had previously made the commitment, and had started working to expand our story, but with Facing Change, we had to draft goals, set timelines, create action plans, and report our progress to the consultants, other museum colleagues, and AAM. This brought helpful structure to a desired outcome. Facing Change was the impetus that pushed all of us to act despite the fear, doubt, worry, and uncertainty that come with any change.

We are firmly on our way, and there is much more to be done. But it is reassuring to know that our board was willing to start by examining itself. The great gift of this project is not just getting the results, but bringing this issue to the forefront, pressing the board and staff to examine themselves individually and as an institution. Most important, the project doesn’t leave us at the doorstep of realization, but provides us with guides and tools to begin dismantling barriers to get to the heart of the matter.

Throughout our journey, we have continued to tell the European settlement story, but we are also now researching the history of the Native American tribes here before settlement and showcasing the cultural and historic contributions of the many groups in our community. Our collection now includes artifacts from the Multicultural Awareness Committee at our local schools and the Mexican boxcar families who once lived in Naperville; we host the story of Ram to celebrate Diwali; and we held the first-ever Celebrate Naperville, a festival to share the music, dance, and traditions of our Muslim and Sikh communities.

These new and important additions live alongside our settlement story, the Scottish Pine Craig Games, Hometown Picnic, and our agricultural history. Why? Because this is us—all of us.

Naper Settlement is owned by the City of Naperville but managed and operated by the Naperville Heritage Society (NHS). Here’s my advice for working with or under a government entity.

Focus on your joint commitment to the public. The city is accountable to the residents who support the museum with tax dollars. The museum educates, engages, and serves as the community’s memory.

Insist on respect for the independence of the museum. A city government is not an expert in history or museums, nor is that its purpose. Museums must have independence to focus on their purpose—education, culture, information, and engagement.

Focus on the mission and goals. In our case, the city and NHS had previously agreed to tell the whole history of Naperville. Now we must educate the city on how the new initiatives support the new mission.

Stay focused. You will need a road map for change and a commitment to stay on that road. Some might try to force you off the road or take an exit. DON’T.

Use and require good judgment. As transformation happens, you are bound to fail or be called on the carpet for something. Use factual information to show the value of your decisions.

Develop thick, thick skin. Make peace with the fact that you will have naysayers and perhaps even enemies. Do what’s right.

Macarena Tamayo-Calabrese is CEO and President of Naper Settlement in Naperville, Illinois.