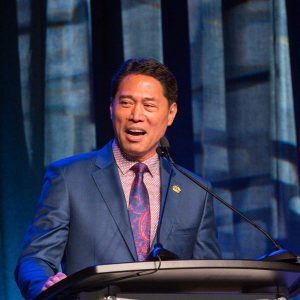 As AAM’s unprecedented national initiative Facing Change gets underway in five cities across the US, I’d like to reflect on what I see as the biggest challenge we will face: that we are already enlightened and it is other people who must change. Let me explain.

Given all the media characterizations of red and blue states, left vs. right, conservatives vs. liberals, and Donald Trump’s base vs. everyone else, it is no wonder that we sense a polarized country. Unfortunately, the political situation in Washington (Congress, the White House, and the Supreme Court) is not abnormal. Our current system is perfectly aligned to deliver the results we now have. There is no dysfunction. The system was designed to minimize change, promote the status quo, and discourage real leadership. It continues to operate as intended, and if we truly want radically different results, then we have to acknowledge that we need a radically different system.

As for assumptions and stereotypes, let me give you some background first. I recently went through a major transition. After having served for 12 years as the executive director of Iolani Palace, a historic site in Honolulu, Hawaii where I was born and lived for nearly my entire life, I decided to look for change. Last year, I reached out to a friend of mine, Van Romans, president of the Fort Worth Museum of Science and History, to see if he knew of any museums looking for someone to fill a number two position, such as a COO. Little did I know that Van was in the middle of a search for that very reason. I don’t think he had officially posted the position yet, because he kept asking me how I knew!

Last November, I flew to Fort Worth for the very first time and interviewed with Van. He offered me the job not long after, and with my family we made the collective decision to leave Hawaii for Texas. However, once the word got out, I started hearing from a lot of people (not just in Hawaii but from across the country) about the “Texas” I was moving to (deep red state, racist, religiously conservative, big guns and even bigger trucks). But these assumptions were all two-dimensional and rudimentary. They didn’t even begin to paint an accurate picture, yet we are accustomed to reaching for quick and simple descriptions of people and places we may not like. Assumptions are a way to conveniently justify our point of view, which we believe is always correct, to the detriment of any facts to the contrary.

In the book Unleashing the Power of Unconditional Respect, it describes our tendency to automatically assume the following:

Yet the irony here is that our assumptions are actually blinding us. We are deceiving ourselves through self-imposed ignorance. And probably the only reason it is not considered pathological is that it is endemic. In a survey conducted recently by CivicScience, over three thousand Americans were asked if schools should teach Arabic numerals, to which 56 percent of the respondents said no. (I bet those same respondents would say that Central America is somewhere in Nebraska.) The same survey also asked for people’s political affiliation and I know what you’re thinking, and you’d be right. Of those who identified as Republican, 72 percent said Arabic numerals should not be taught in schools, whereas only 34 percent of Democratic respondents said no. However, in another recent survey, people were asked whether the science curriculum in schools should include the creation theory of Catholic priest George Lemaitre. 73 percent of Democratic respondents said no. And in case you were wondering, George is the father of the Big Bang Theory (no, not the television show). Ignorance is apolitical, and so is bias.

In our interpersonal relationships, we bring our own experiences and background to the table to inform how we see things. It is a mistake to assume that our way of seeing is the only way to see. To make things worse, add judgment to our assumptions and you have a recipe for conflict. So let us take a step back, and reflect on the following:

The Facing Change initiative, through the leadership of AAM and our allies, means the distribution of loss. What we care about is not necessarily what would motivate other people. We literally have to sell DEAI.

Leadership is inherently subversive, and some people will attack us personally to divert from what we are doing. Others deeply entrenched in the current system will be passive-aggressive, cheering on our work and telling us how courageous we are—all the while secretly enticing us to walk off the cliff.

From our own allies, those dedicated to DEAI work day in and day out, they will say that we aren’t doing enough, and by the way we’re taking way too long. What we must remember is that leadership is also about disappointing our own people at a rate that they can absorb. The process of change is iterative, it requires inordinate amounts of patience, and it is extremely inefficient. But we all can easily recognize when there is a lack of leadership.

Aside from the leadership aspect of this kind of work, DEAI will also challenge us to be self-aware. We cannot invite others to change if we ourselves refuse to acknowledge our own contribution to this conflict. What I’m speaking about here is selective empathy. We feel outraged and often moved to action when a person that we identify with is harmed, either because they look like us, share similar views, or we judge them to be worthy of our empathy. Yet we do not feel the same when something awful happens to people who share the opposite viewpoint—people with whom we are unable to identify because we have judged them to be “less than.”

When people marching in the streets in support of civil rights are suddenly attacked, we empathize. We mobilize. When neo-Nazis marching in those same streets in support of white supremacy are suddenly attacked, we watch. Some of us will say they incited the violence, but what we really mean is they deserved it. Some of us will be indifferent. But there will be little to no empathy. Donald Trump was wrong to say that there were fine people on both sides in Charlottesville. The correct statement would have been: there were people on both sides, human beings.

So here is the crux of the issue. Indeed, I would venture to say that the ultimate success of DEAI rests on this. Imagine now just one person in that neo-Nazi march chanting hateful rhetoric. And that one person gets hit in the face with a brick from a counter-protester. Stunned, with blood running down his face, do we really think that all of a sudden, that person will go: “Geez, I should really rethink my viewpoint. Maybe I shouldn’t be hating on minorities. Maybe immigrants are good for the country. What an epiphany to have encountered that brick! Thank you!” I can guarantee you that will not happen.

In doing this work on DEAI, we cannot launch verbal bricks at those who oppose us. We cannot even think in that way, because we are only going to contribute to more conflict. We must remember that we cannot change other people. Our actions, words, and thoughts must exemplify our goals. We must remain open to those who disagree with us, and continually invite them to consider what we are trying to accomplish—all without hate, without fear, without judgment. To expand on Michelle Obama’s often repeated line “When they go low, we go high,” I would propose to you that we stay high without hubris, and kneel down with our hands always extended to lift them up when they are ready.