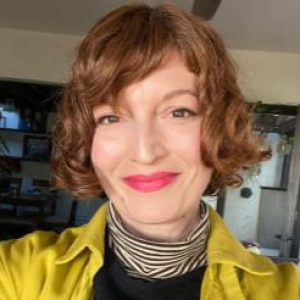 An excited murmur can be heard throughout the audience as they await the show to begin. When we come together to watch a live performance we expect to be moved, to be transported out of the mundane of daily life and have our imaginations engaged. This communal experience, known as theater, is as old as human history, in one form or another. It is one way that we bond with each other. The anticipation of an imminent transformative journey is palpable in the diorama hall at the Natural History Museum of Los Angeles County (NHMLAC), where a Dinosaur Encounter* is about to begin.

During the show, the audience cheers as a young guest, decked out in a bedazzled dinosaur shirt, is called onstage to feed the juvenile Triceratops known as Dakota. The child is hesitant as they approach the moving, grunting creature, whose giant head is adorned with a formidable frill and three horns. The audience falls into a quiet anticipation as Dakota’s feet shuffle impatiently, her beak opening and closing, indicating that she’s hungry. The child onstage gets closer to the dinosaur, leaf in hand, and reaches their arm out nervously toward her beak. Slowly Dakota approaches. You can hear a few quiet “awww”s from the crowd. One child audibly exclaims, “She’s so cute!” Others giggle in response. Dakota opens her mouth and suddenly clamps it closed with the leaf in its clutches and excitedly wiggles her tail. The audience cheers as the child onstage, grinning from ear to ear, watches a dinosaur playfully eat a leaf right at their feet. The host of the show thanks the young visitor and sends them back to their family, who gleefully celebrates their bravery.

As a theater artist, I have been witness to the phenomena of an enraptured and moved audience countless times, but now science has offered a bit of insight into what is going on physiologically. Researchers from University College London found that audience members, whether they know each other or not, will synchronize their heartbeats while watching a live theater performance. The study measured the heart rates and sweat glands of audience members as they watched both live theater and movies. It found that the audience’s heart rates did a bit of a synchronized dance, rising and slowing as they watched a scene unfold before them, and that this was far more pronounced in a live theatrical experience than when watching a film.

The full-suit Triceratops puppet, created by the fabulous puppeteers at Erth, is made of aluminum and plastic boning, foam, and lycra painted with acrylic, and contains an internal speaker and other mechanisms. Inside is a puppeteer who is using stilts on their arms and whose back legs are inside of the legs of the puppet. They are holding the sixty-five pounds of the weight of the puppet on their back, using largely their shoulders and core strength to maneuver it. Many technical elements need to come together to bring the dinosaur to life, but when they all unify in a performance, the audience forgets to focus on the mechanisms at work. They are transported. They ooh and aww. They suspend their disbelief. There is a dinosaur in the room and it’s pretty darn cute. Ultimately, you could say, they end up catching feelings for a Triceratops.

This act of relating to the characters on stage is another thing that make theater so powerful. In a study published in the Journal of Experimental Social Psychology, researchers discovered that watching theater can lead to increased empathy, the ability to understand the feelings of others. According to one of the authors of the study, Steven Rathje, the team found that “after, as opposed to before, seeing the plays, audience members reported feeling more empathy for the groups of people depicted in the plays.” But why is it significant that the audience catches feelings for a dinosaur puppet? I would make the argument that this empathy toward the dinosaur increases intellectual curiosity about these creatures, paleontology, and other related studies. Forming this type of connection is likely to have strong positive outcomes in their lives. According to an article by Saga Briggs, “researchers…have identified significant correlations between student scores on measures of empathetic understanding and their grade point averages, and a review of research related to empathy training/instruction indicates that this instruction enhances both critical thinking skills and creative thinking.”

Producing the Dinosaur Encounters allows us to see this effect up close. For instance, the father of a dedicated fan shared with us in an email the love his son had developed for our puppet, and in turn for the Natural History Museum:

“Lev didn’t just watch T-Rex and Triceratops. Lev BECAME T-Rex and Triceratops. After each show, Lev would show us his improvisational reproduction of the show we had just watched. He insisted upon silence while he delivered his performance, mirroring and perfectly mimicking the T-Rex right down to lifting his legs, bending over with retracted arms, and delivering his ferocious ‘roar’ while bobbing his head back and forth seeking his prey. By the time Lev turned four last year, he had visited the NHM over one hundred times.”

We all know kids who are fascinated by—nay, obsessed with—dinosaurs. But how did so many of them develop this “dinomania” in the first place? It took more than just the knowledge that the creatures had existed to make them a subject of public fascination. In his book The Horned Dinosaurs: A Natural History, Peter Dodson writes, “When Richard Owen coined the name dinosaur in 1842, it had no impact on the public—none whatsoever. But twelve years later, when he teamed up with the eccentric sculptor and artist Benjamin Waterhouse Hawkins, the dinosaur at last took tangible form and became accessible to the Victorian public—and Dinomania was born!” It was only when artists brought the concept of dinosaurs “to life,” in other words, that they became a phenomenon. This effect is only enhanced with the experience of witnessing a full-suit puppet of a dinosaur moving and roaring right before your eyes during a live performance.

Like the renderings that originally introduced dinosaurs into the public imagination, NHMLAC’s Dinosaur Encounters performances are a collaboration between scientific experts and craftspeople. The designs of the full-suit Triceratops and T. rex puppets were informed by the museum’s paleontologists, including Dr. Luis Chiappe, Senior VP of Research and Collections, who advised the fabricators on how best to merge entertainment with science. The physical characteristics of our juvenile Triceratops and T. rex puppets were based on our paleontological collections and research. The museum’s scientists were keen to have some of the current research on dinosaurs reflected in these creatures. After a performance with our T. rex puppet, known as Hunter, we often get the question from a visitor (young and adult alike), “What’s that fluffy stuff all over his body?” This opens up a conversation about proto-feathers, and how scientists have been able to make the connection between theropod dinosaurs and modern-day birds. Would so many guests have readily made that connection otherwise? Hard to say, but I imagine that for many, the excitement of meeting a “real-life” T. rex covered in proto-feathers may have been the initial spark.

The experts at NHMLAC see the value these puppets have in garnering interest and support for their research. Dr. Nathan Smith, Curator at NHMLAC’s Dinosaur Institute, says, “As scientists and museum educators, we look for ways to ‘bring to life’ a lot of these prehistoric animals, and do so via scientific illustration, exhibits, and even feature films. However, the puppets are a truly unique way where we can envision these species as living animals, but also allow visitors to interact with them. In terms of a visceral experience, that’s still miles ahead of what you might be able to do on a movie screen, video game, etc.”

Museums hope to inspire our visitors to develop a care for and interest in our collections, and to deepen their understanding of the world we share as a result. As the Dinosaur Encounters show, theater can be one of the best tools for fostering this curiosity. But you don’t necessarily need to commission a life-size dinosaur puppet to do it. You only need two simple ingredients: actors and a script. I encourage museums to provide theater training for your staff, or consult with theater artists, or even better still, bring them on as permanent members of your education departments. An art museum can theatrically animate how exhibits are curated, as seen at the Denver Art Museum’s award-winning show Art Emergency. A historical site can bring forth the personal stories interwoven throughout the history it interprets, as Colonial Williamsburg has expertly done in its show Journey to Redemption. Any museum can find a way to use theater for its purposes; just explore the International Museum Theater Alliance website for proof of this. Theater artists will be able to bring the guests into a communal, shared, and oftentimes revelatory experience of awe. As the audience’s heartbeats synchronize with each other and they become emotionally connected to the characters, their curiosity about the world will be fostered and nurtured. They will see the collections in a new multidimensional, multisensorial light.

*In-person performances of Dinosaur Encounters have been on pause, but are anticipated to return in Spring of 2022.

Ilana Gustafson is Manager of Performing Arts at the Natural History Museum of Los Angeles County. She is a theater artist, educator, and writer dedicated to using performance and events to create meaningful connections to this planet and one another. She is especially passionate about making science accessible for the general public and is honored to work with a team of incredible artists in the Performing Arts team at NHMLAC who make this happen on a daily basis.

2 thoughts on “Catching Feelings for a Triceratops: How Live Theater in Museums Evokes Empathy in Visitors”