Last year, as I travelled the country talking about museum innovation, pop-up culture and other trends, the most popular story I told was about a project launched by the Walker Art Center in Minneapolis. I received so many follow-up questions about the Walker’s first Internet Cat Video Festival that I’ve invited Scott Stulen, artist, dj, curator, and programmer of Open Field at the Walker Art Center, to tell us more. (You may remember Scott as the orchestrator of the Drawing Club’s activities at the Alliance’s conference last year.

On a warm August evening 10,000 people gathered on a large green space next to the Walker Art Center. The crowd covered the field, spilling out into neighbor’s yards and stopping traffic on the nearby freeways. They didn’t come for an exhibition opening or a rock concert, but to watch a juried compilation of Internet cat videos. The first Internet Cat Video Festival (#catvidfest) attracted unprecedented media attention for the Walker and sparked interesting dialog about audience, institutional relevance, curation in the age of YouTube and (of course) cats.

Perhaps an Internet Cat Video Festival was inevitable, but what made this event significant was not only that it was the first, but also that it was presented in the context of a respected contemporary art center. The implication was that the Walker was indirectly giving Internet Cat Videos value or approval, thus elevating the form to “art.” But ten thousand people didn’t just come to see just cat videos that can be easily found on the Internet, they came to connect. 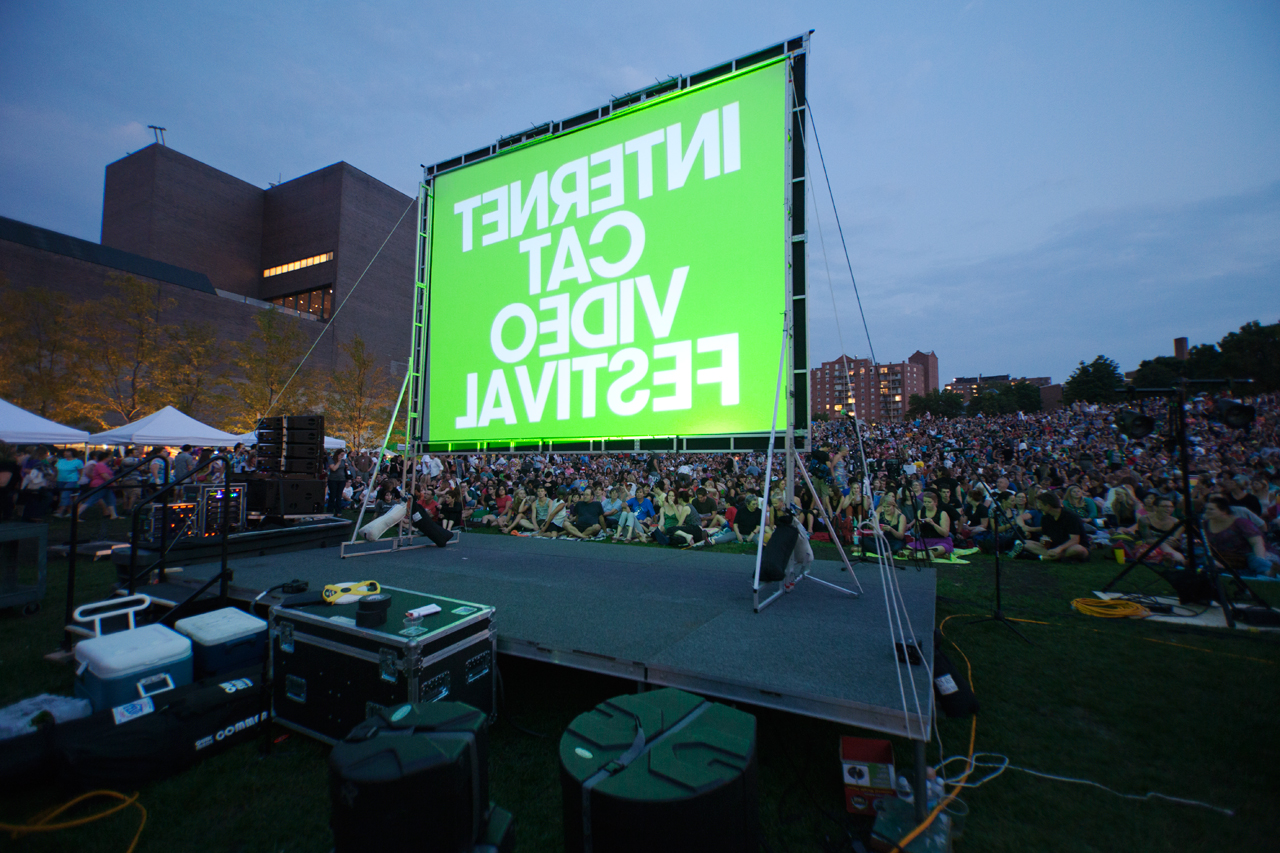 It all started with a simple idea, proposed by program fellow Katie Hill, to screen a few Internet Cat Videos from YouTube at the end of the summer. Katie and I turned this suggestion into a formal program and posted a call to nominate your favorite videos via an online form. The event went instantly viral. Ten thousand nominations came pouring in and after countless hours of screening and careful editing, a final cut of 79 cat videos was compiled. The screening was augmented with a complete festival experience including local animal resource nonprofits, artist projects including a giant cats cradle, a local band playing Cat Stevens and Cat Power covers and food and drinks. All contributed to create a spirit of community, collaboration and spectacle.

The Internet Cat Video Festival is one of the most attended and covered events in the history of the Walker Art Center. However, the 60+ inquiries from all over the U.S., Canada, Mexico and Europe to re-stage the event was an unexpected outcome. Officially the “catvidfest tour” started last fall with smaller events at UMASS Boston and The Museum of Photographic Arts San Diego. The spring tour kicked off at the Memphis Brooks Museum of Art, a presentation at SXSW Interactive in Austin, Tex., and upcoming events in Oakland, Portland, San Francisco and Chicago. Interestingly, all of the inquires have come from other museums or cultural non-profits, not commercial entities.

Creating a Platform for Possibility

One of the frequent questions about the festival is how did this program emerge from the Walker. The answer is Open Field, an ongoing initiative that turns an adjacent green space into a collaborative programming platform for artists, the institution and the public. The Internet Cat Video Festival shared several goals with Open Field including crowdsourcing content, placing it in a new context, flattening perceived hierarchies and creating a platform for social interaction. The Cat Video Festival was just Open Field on steroids.

From the beginning our task was to frame the festival in the appropriate context within the institution. For a program like the Internet Cat Video Festival to thrive it needs a platform like Open Field for support, and a bit of distance from the museum.  Without this slight separation there can be conflict. For example, the Walker’s film and video department, internationally known for curating daring and experimental work, weren’t involved with the Festival. For curatorial departments this program, viewed in the wrong context, could be perceived as serious threat to their serious work. Open Field provided the perfect environment for the Walker to the embrace the program, and its risks, appropriately.

All Audiences are Equal 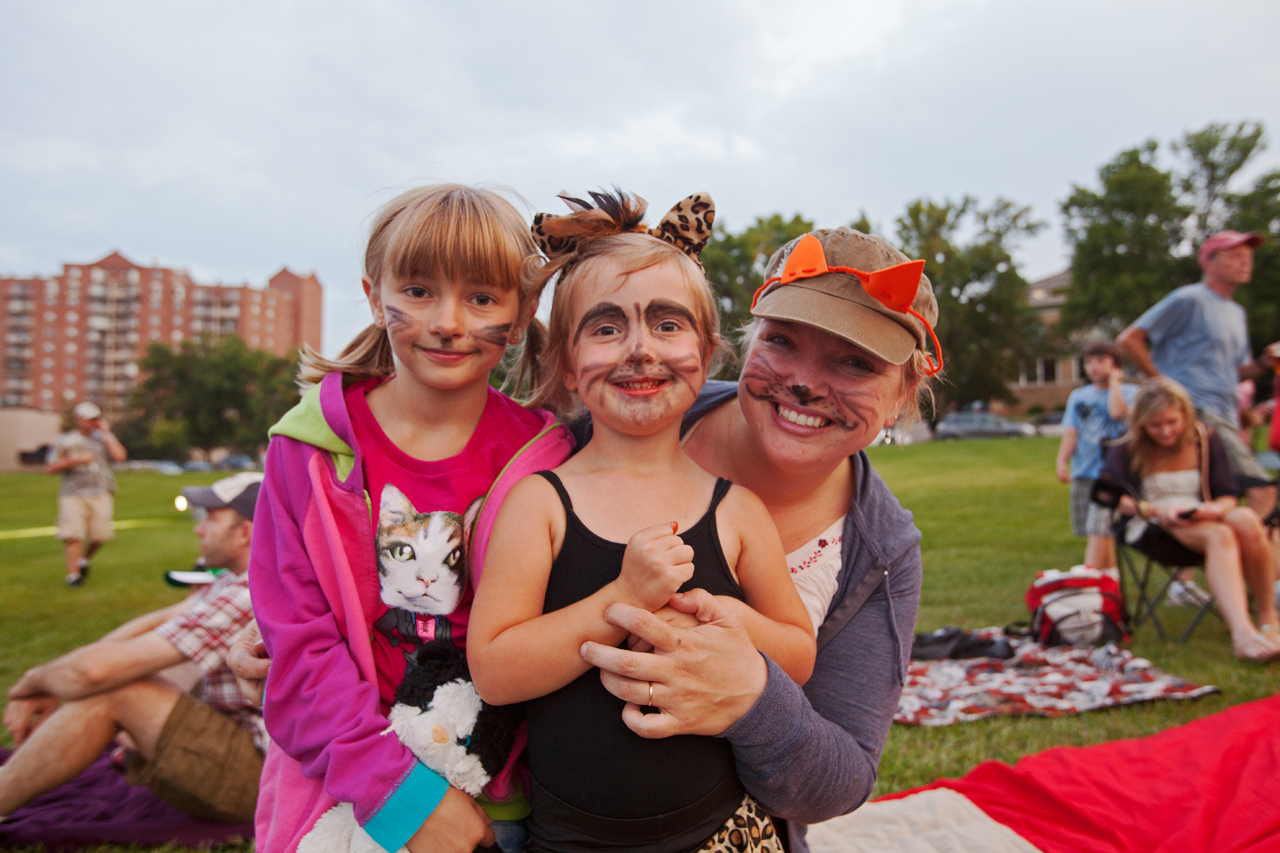 The audience for Internet cat videos is surprisingly complex. Submissions were received from all over the United States, Japan and Russia. The international appeal speaks both to the universal nature of the content and the reach of the Internet. The festival attracted everyone from young families to full-on “furries,” hipsters, to retirees. It was a combination of a very dedicated niche audience as well as a curious general public. I feel all audiences are equal and valuable, both the traditional museum going audience and the cat video audience. The cat video audience found value, and even pride in the Walker as a part of their community. Many attendees had never been to the Walker prior to the festival and through their positive experience the institution gained value and became accessible.

It’s About Connectivity and Sincerity

There are aspects to an Internet Cat Video Festival that are pure silly entertainment. It is cats jumping off tables, smart-ass voices overs and cats in boxes, but there’s a more critical view as well. What does this type of content, that is undeniably popular, mean for society? What does it mean for cultural institution/museum to be relevant and to reflect what’s happening in contemporary life? What impact does the universal availability of the tools of production and means of distribution mean for both artists and museums? At present, everybody who has a blog or a Pinterest board is calling himself or herself a curator, and everybody that has a cell phone can produce high-definition videos which can be uploaded and viewed by millions of people—without any intervention from a curator of museum. It changes the possibilities and also how we must engage our audiences.

I am not going to call cat videos high art, but I am also not going to call them meaningless. Within the videos selected for the festival, there is a full range—from Cory Arcangel, an established contemporary artist, to Will Braden, a trained filmmaker who won our “Golden Kitty” award, to people who randomly captured a moment on a cell phone. In the realm of the cat videos, these are side by side and presented with a flatness. There is no distinction or hierarchy.  The ongoing popularity of Internet cat videos is evidence that it isn’t as simple as it may appear. Internet Cat Videos are doing the things compelling art should: they raises questions, challenge assumptions, anger people, creates emotional connection and in the case of our festival, are a vehicle to create a real experience.

Not everything is for everyone. The truth is that if you are serious in attempting to create a genuine experience, you can’t please everyone. The Internet Cat Video Festival is not ironic. It’s not making fun of anyone or anything and this is why it works. People crave real, un-ironic and genuine experience and they are starving for moments of joy. The festival provided a simple platform for this affection to be shared and people responded accordingly. Authenticity and transparent good intention is uncommon in contemporary art, and in society for that matter. The Internet Cat Video Festival provided an opportunity to sit on a hill with strangers and share in a moment of levity through something as unexpected as a viral video. So in the end it’s not about us, the museum, or even the cats, it’s about creating the opportunity to share something together.